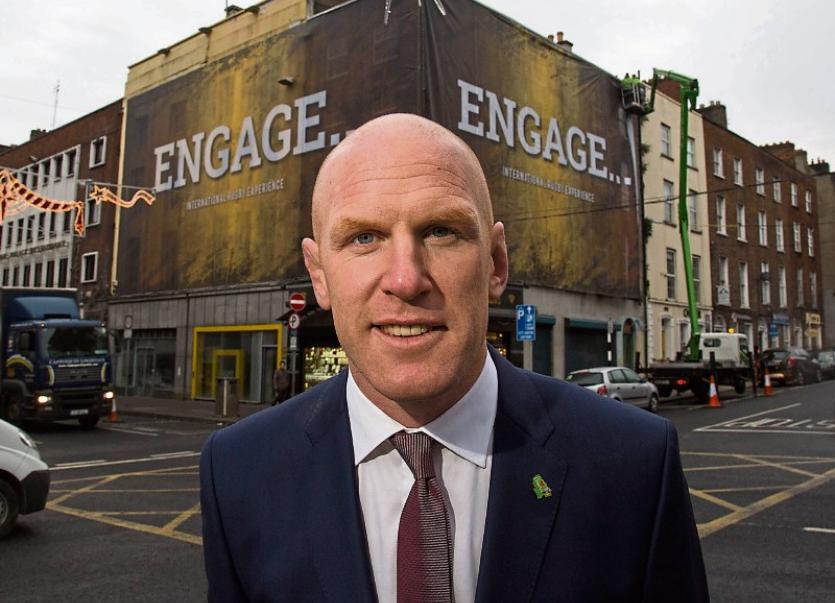 PAUL O’Connell has said the decision by An Bord Pleanala to grant permission to the JP McManus-backed Limerick rugby museum “validates” the original planning given to the project.

The Munster and Irish rugby legend who is chair of the board of the International Rugby Experience said he was “very pleased” with the outcome this Friday for what is envisaged being one of the best of its kind in the world.

The high-profile team behind the Limerick development has now confirmed that construction will start “in the coming months” after planning was granted following an appeal.

“We are very pleased with the outcome which validates Limerick City and County Council`s decision to grant permission initially,” Paul said.

“The project has now been rigorously assessed by both the local and national planning authorities and we are delighted it has received approval. It is envisaged that this Visitor Experience will be one of the best of its kind in the world and we can’t wait to really bring it to life on O’Connell Street in the heart of the city.” he added.

The International Rugby Experience is being backed by JP McManus to the tune of €10m.

The Board of the International Rugby Experience welcomed the news that permission has been granted and said that “work can now start on what An Bord Pleanala has described as an ‘iconic and unique redevelopment of a site in Limerick City Centre’,” it said in a statement this Friday lunchtime.

“Construction will now begin in the coming months on the 30,000 sq ft development, located at 40-41 O’Connell St., in the heart of Limerick City.

“It will drive the creation of 100 local jobs initially, with dozens more to be generated once the building is complete and will attract thousands of visitors to Limerick City Centre. The International Rugby Experience will primarily serve as a celebration of the game of rugby, with further layout and exhibit details to be revealed in due course.

“International award winning and 3 times Stirling prize shortlisted Niall McLaughlin Architects are the driving force behind the creative design of the building, while Event London are tasked with curating the exhibits and the design inside the visitor centre,” it adds.

Mayor of the City and County of Limerick, Cllr James Collins, welcomed the decision by An Bord Pleanála to grant planning permission.

“I’m delighted that planning has been granted for the Rugby World Experience on O’Connell Street and it will be a wonderful addition to the heart of the city centre.

“The new building will no doubt become a landmark as we re-develop our main thoroughfare, making it a must-visit destination for locals and tourists alike.

“Limerick is synonymous with rugby and this new museum will attract rugby fans from around the world wishing to capture and experience the magic and essence of Limerick and rugby.

“The project fits nicely into the plans for Limerick 2030 which will transform Limerick over the next decade.”

Minister of State Patrick O’Donovan T.D has also welcomed the news that the International Rugby Experience is to go ahead.

The former Minister for Sport described the decision by An Bord Pleanala to grant permission as “brilliant news for the people of Limerick”.

He said: “As a Minister from Limerick and someone that has served as Minister for Sport, I am delighted this €30 million euro project is going ahead.

“It is going to offer a huge boost to tourism and will bring up to 100 jobs. It’s an indication of how far Limerick has come and how progressive and forward thinking those involved in the project are.”

The news has also been welcomed by Limerick Chamber CEO Dee Ryan, who said it was as a key moment that will pave the way for a “game-changing” project for the city and region.

“This is a project of unquantifiable significance for Limerick. It’s a game-changer. One of our key objectives in Limerick Chamber is to see the value proposition for the city centre strengthened so that we attract more people to live, work and shop here. We’ve long since argued that we needed a stimulant for that and the International Rugby Experience is exactly that.

“Together with the planned €9.1million LUCROC project for the revitalisation of O’Connell Street by Limerick City and County Council and the work of Limerick Twenty Thirty in redeveloping key city centre sites that will accommodate thousands of jobs, we are looking at a whole new era for Limerick city centre.

“Limerick has made massive gains over the past five years, with 12,000 new jobs announced in that time. But that’s only brought us part of the journey and what’s now about to happen will take us to another level again.

“The International Rugby Experience will draw tens of thousands of visitors each year. It’s an exciting time for Limerick.”

Ms Ryan said that the McManus family, Paul O’Connell and other key drivers of the project deserve huge praise for their commitment.

“The International Rugby Experience will be a unique, permanent and dynamic celebration of one of the world's great team sports, a sport that's part of Limerick's DNA but also one that's equally cherished across the globe,” she added.

"Sense has prevailed at last with An Bord Pleanala," was how metropolitan mayor Daniel Butler saw things, "This marks a significant watershed moment for the future of our city centre and one that will bring a new type of visitor."

"Huge credit goes to Paul O Connell, JP McManus and all the team involved in this project. This an international standard project with internationally recognised people from the architect to the team behind it and so will put us firmly on the international stage. This now reaffirms Limerick as the heart of European Rugby," he added.