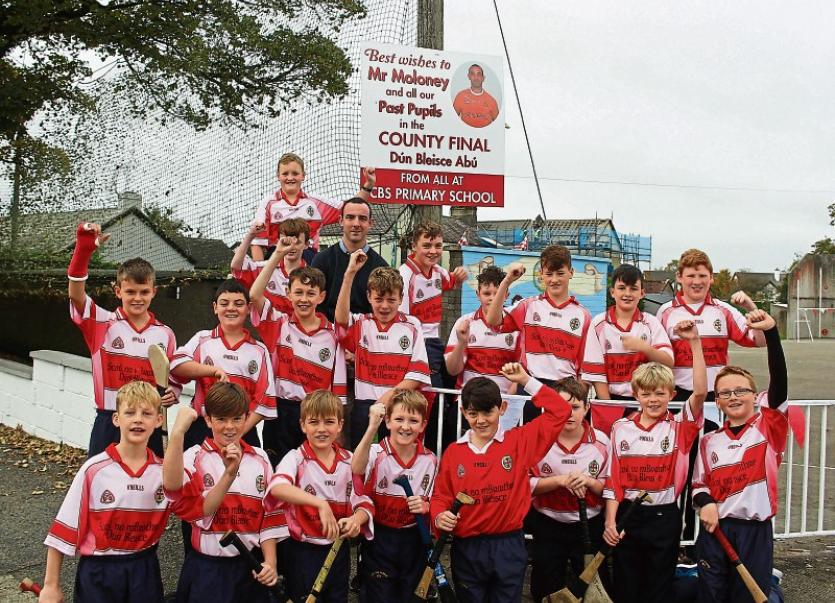 There will be no homework for the rest of the year in Doon CBS Primary School if teacher, Denny Moloney and his Doon GAA Club teammates lift the Daly Cup Picture: Michael Cowhey

Doon wouldn’t be in the final only for múinteoir, Denny Moloney’s long range injury time winning point against Patrickswell in the semi-final. The all-conquering Na Piarsaigh stand in the club’s way as they try and win their first ever senior county title.

Excitement is reaching All-Ireland levels in the parish as shown by the photos from Doon CBS Primary School and Doon Convent National School. They boys and girls can’t wait until Saturday night to cheer on their local heroes, and in the case of the CBS, support their teacher Mr Moloney.

“There is great excitement in the school. We hung up some some flags and bunting during the week. The boys are really excited. They’re looking forward to one of the teaching staff playing in the county final so it is great,” said Denny, who also hurled for Limerick in the past. The fourth and fifth class teacher said most of his pupils were at the semi-final although they didn’t treat him any differently on the Monday morning after his match winning score!

“They were the same as usual. It is all history now. Nobody will be talking about that point if we are beaten on Saturday night. All the boys are mad for hurling out here. The majority will go to the match,” said Denny.

Sixth class pupils – Dylan Byrne and Callum Wallace – say they are definitely going to the Gaelic Grounds. However, when asked who their favourite player is neither of them pick Denny. Extra homework for them! Dylan picks Darragh O’Donovan, while Callum plumps for Richie English.

However, they agree on who is going to win. “Doon, definitely!” they both shout. But Na Piarsaigh are the hot favourites with the bookies at 3/10.

“And rightly so. Since 2008/ 2009 they have shared nearly every county title with Kilmallock bar Patrickswell one year. They were All-Ireland club champions, they were in the All-Ireland final this year and they have a litany of county hurlers in their squad.

“We’ll come with our game and we’ll see how it goes. We’ve played them plenty of times before and they have always been reasonably close games. We’d be hoping we can match them. It will be a difficult task and we are under no illusions,” said Denny.

The celebrations would go on until 2019, starting with a lip sync battle on Sunday night in the Ballykisteen House Hotel. Players, Cathal McNamara, Barry Murphy and Pat Ryan “Simon” are taking part. A host of other locals will be on stage. Limited tickets remain for a night that will go down in history if Doon win.

“If it happens it would be brilliant. We are crying out for one in the club. We’ve often been tagged with the title that we’ve great underage players but we never did it at senior level. That’s what we are trying to accomplish. Every hurler who plays the game in Limerick wants a county senior hurling medal and we’re no different. We are one step away from it but it is going to be a massive step to take if we do get over the line,” said Denny.

“I can’t remember the last time there was four Doon boys on a Limerick senior hurling panel, let alone win four All-Ireland medals. It is great for the club and great for the parish.”