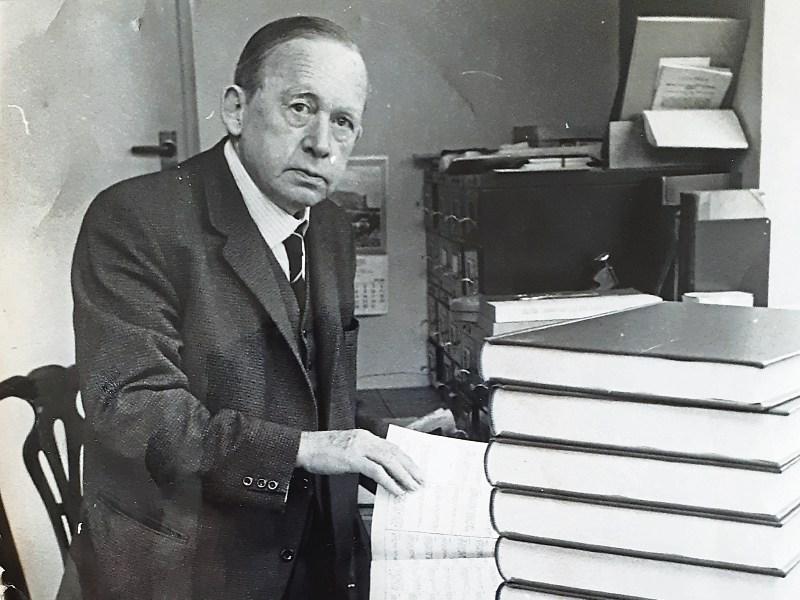 THIS is a story of many characters, but chief among them is a humble librarian from West Limerick, whose efforts alongside his colleagues in Irish Military Intelligence, helped turn the tide of the Second World War.

With these dramatic and arresting words, Marc McMenamin opens the untold story of Richard Hayes, mathematician, polyglot, Director of the National Library, Ireland’s foremost Nazi code-breaker and an Abbeyfeale man.

It is a book that delivers on what is says on the cover: a riveting and deeply researched account of an extraordinary period of history, opening up a period about which many people know little.

Marc McMenamin’s introduction to the story came by chance. A colleague spotted a Dublin house for  sale in the property pages, known locally as the Nazi house and said to Marc: There’s a story in that.

That began a long period of research for Marc, a history teacher, researcher and documentary maker. “I had  no idea of the extent of German espionage in Ireland,” Marc explained following the launch of his book this week. “It was amazing to see what was going on… What I had been taught was that Ireland was neutral and we stayed out of the war. There were rations and butter vouchers and that is it,  nothing like this at all.”

The  “this” ended up, first as a radio documentary on RTE 1 and now as a book which tells the story of how Richard Hayes, the smart young lad from Abbeyfeale, turned out to be a crack codebreaker.

The Abbeyfeale connection ran deep, according to Marc  Richard’s father, Richard Senior was a bank manager in the town but his grandfather Ambrose was also from Abbeyfeale. The family moved to Claremorris when Richard was still young but family life but his  father died when he was 18 and his brother Ambrose disappeared.

However,  young Richard was clever, excelling at Clongowes, pursuing three degree courses at the same time and becoming fluent in several languages including German. He got a post in the National Library and was later to become its national director.

How he first became connected with Military Intelligence remains a mystery Marc explained,  but when WWII began he was headhunted for G2, the Irish Military Intelligence section. His aim, because of his mathematical prowess, was to break the codes so that the messages passed on to or back from Germany could be understood.

Ireland was important to Germany as a source of information about Britain, about weather  and possibly as a launch-pad for an attack on Britain itself, Marc pointed out. Ireland was also important to Britain, precisely to prevent any of these things happening.

arriving in Ireland by various means, including parachutes and also deals with the political and diplomatic context in which this happens.

But Marc makes the case that  Hayes was responsible for three major and significant breakthroughs.

The first centred around a spy called Schutz who arrived in Ireland armed with a special microdot code where innocuous messages contained secret messages hidden within dots on the page and which were visible only by being magnified. It was Hayes who spotted something amiss with a full-stop which led to this discovery.

The second major breakthrough concerned Herman Gortz who was dispatched to Ireland with one of the most sophisticated ciphers or codes in use by the Germans. At the time, there were 16 people working in Bletchley Park in England trying to break this code and they were having difficulty, Marc explained.

But Richard Hayes broke it and some of the measures he had to take to do so read like an old-fashioned spy thriller. Gathering up burnt pieces of paper and applying chemicals to them is as James Bond as you can get.

A third significant breakthrough involved the spy from Kilkee, John Francis O’Reilly who was trained as a spy in Germany and was parachuted into West Clare.

He brought with him a code-cipher wheel or device which Richard Hayes set about analysing and discovered that Germany had developed an entirely new system of carrying out substitution and transposition ciphers, the keys to any code. This information was shared with British intelligence and was the break-through in decoding German messages in the build-up to the Battle of the Bulge. “Dr Hayes’ discovery played a crucial role in the Allied victory,” Marc writes in the book.

In the book, Marc also deals in some detail with the life of John Francis O’Reilly which is so fantastical, it couldn’t be made up as well as with the Republican links with Germany.

“At the end of the war, Hayes was described as a colossus whose gifts amount to genius,” Marc told the Limerick Leader. But he added: “He has almost written himself out of history.” Richard Hayes rarely if ever spoke about his work, he pointed out. “It was the ethos of the time… you just didn’t talk about it.”

He described Richard Hayes as very discreet, a man with a very dry sense of humour who loved peace and quiet.  “He loved learning and would hate anything to get the better of him,” he continued.  In the best sense, he was a practical public servant, a man with a huge sense of duty, who didn’t seek fame and  didn’t like a fuss or a crowd.”

But Marc added, he would have wanted things to be on the historical record.

“I would have loved to talk to him,” he said. “ It is a great shame nobody took the time to do that.”

“I would like for people to see him for the hero he was. We all need heroes, especially Irish heroes and he was a great Irish hero. He is a hero for Abbeyfeale, for West Limerick, for all of us.”