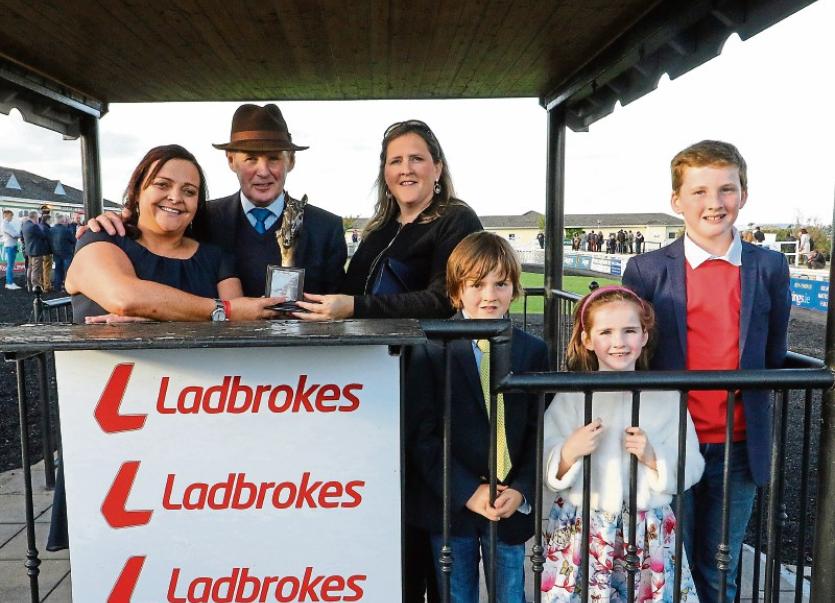 It was a day of sunshine and symmetry at Limerick Racecourse on Sunday when a late local hero was remembered in the title of the day’s feature race.

Five years ago to the day, the racing fraternity had turned out in force for a special fundraising meeting at Greenmount for the late JT McNamara from Croom, and fellow jockey Jonjo Bright, after both men had suffered debilitating injuries while riding. The sun shone brightly that October day too and €600,000 was raised by the racing family to help their own.

On Sunday, a crowd of close to 10,000 people passed through the gates, when the feature event on track was the JT McNamara Ladbrokes Munster National.

The late Croom rider’s wife Caroline and children Dylan, Olivia and Harry were on hand to present the winner’s trophy and it was entirely fitting that Spider Web should take the spoils in a driving finish under young jockey Luke Dempsey, in the colours of none other than JP McManus.

JT had, of course, worn Mr McManus’ green and gold silks to many glorious wins on the big stages of Cheltenham and Punchestown, not to mention his hundreds of victories in the point-to-point fields around the country.

Mr McManus has carried off almost every major prize in the sport at this stage, though he has spent quite a wedge of money to do so; his investment in racing runs comfortably into eight figures.

Winning the Keanes Jewellers-sponsored best dressed lady competition, on the other hand, can be achieved with a relatively modest investment and a little creativity.

A point proved by Laura Hanlon, from Fuerty, Co. Roscommon, whose inexpensive ensemble took first prize in a hotly-contested competition.

Indeed, if the JT McNamara Munster National had taken some winning, the competition for best dressed lady was positively Grade One level, to borrow a phrase from the track.

Laura was first past the post with an eye-catching white and pink headpiece she made herself, a pale pink, fine knit dress that cost just €20 from iClothing, and co-ordinating shoes from Penneys.

The accessories, a white fur from DV8 and a white clutch bag from Lulu Guinness, may have cost her a little more, but after taking first prize, a €4,000 diamond ring, she won’t be counting that cost.

“I am shaking from head to toe, I am beyond thrilled to win,” said Laura afterwards. “My dress cost just €20, so it is great to win wearing something that doesn’t cost the earth.”

Second prize was won by Eva Dunne, Ballincollig, who won spa treatments to the value of €1,000 from Rain Spa at the Radisson Blu Hotel. Siobhan Kennedy from Tournafulla came third winning a luxury hamper from Inis, Energy of the Sea. The ladies day competition took place in the new Fashion Zone where patrons enjoyed a Prosecco and afternoon tea reception and a fashion show by the Celia Holman Lee Agency.