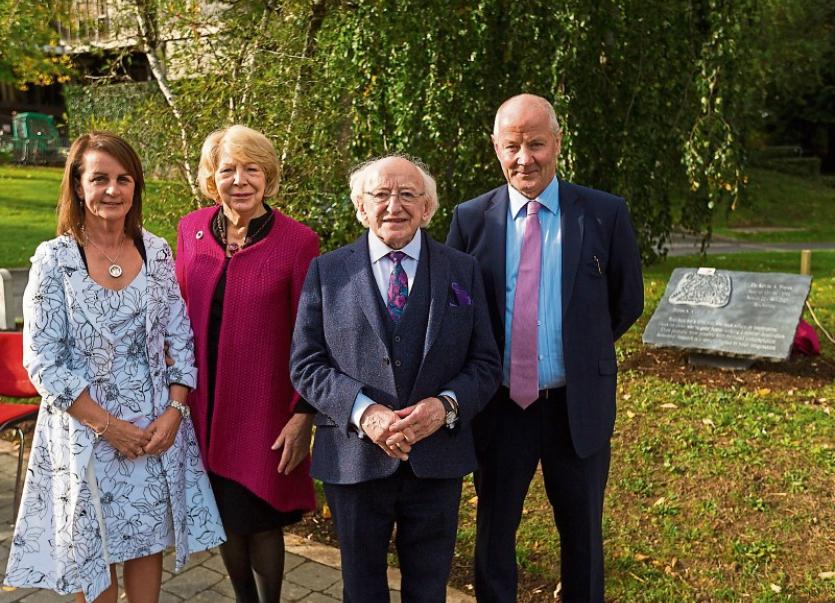 James and Catherine Hayes, parents of Kevin, with President Michael D Higgins and Sabina at the ceremony Picture: True Media

THE FATHER of an outstanding young scientist has spoken proudly of how his deceased son’s work continues to impact lives, as the President of Ireland unveiled a plaque in his memory.

Kevin Hayes, aged 26, from Murroe, was in the final stages of writing up his PhD study at the University of Limerick, when he died suddenly last year.

His untimely death, was attributed to Sudden Arrhythmic Death Syndrome (SADS), an unexplained heart condition that can cause death in young people that otherwise appear healthy and fit.

The award-winning biochemist who presented at conferences alongside Nobel laureates and worked to improve gender balance in the sciences, was remembered on Friday by his family and friends at an unveiling ceremony in UL attended by President Higgins and his wife Sabina.

“In life Kevin set himself very high standards and always aimed for the stars. More often than not he achieved his lofty targets and even still, since his passing, those high standards are being maintained,” said his father James Hayes.

“We received his PhD award at this year’s conferring ceremony and another paper of his has just been published in Scientific Reports. The Chemistry department in UL have commissioned a medal in his memory which will be awarded annually to the top-performing first year student in science. Last week the band Anna’s Anchor dedicated their new album to Kevin’s memory. Today we have the highest office in the land unveiling a memorial tribute to Kevin. We can’t go much higher than that,” he added.

The limestone memorial is located beside the Lonsdale building in UL close to the laboratory where Kevin worked. The monument features a graphic representing the protein structure the young scientist solved and also a verse written by his father, inspired by his son’s passion for research.

“Kevin absolutely loved research and he had a wonderful understanding of science.I hope that he will continue to inspire our young researchers. On a day when things might not be going exactly as expected they could come out here, get a breath of fresh air and have a chat about it,” explained his father.

Speaking at the unveiling ceremony, President Higgins said it was an honour to be asked to pay tribute to a brilliant young scientist and he praised Kevin’s family and work colleagues for honouring his memory in the most “practical way”.

“The important thing is the work has gone on to be published and will be an inspiration to many. It is a privilege to be here and I thank his family for allowing me to share this honour to him.”

A first class honours graduate of Industrial Biochemistry, Kevin's research was published in the first year of his doctorate studies. He was also awarded for his outstanding post graduate contribution to the Department of Chemical Sciences in UL before his sudden death on June 22, 2017.

Kevin worked in UL under the supervision of Professor Tewfik Soulimane in Structural Biochemistry and Professor Tony Pembroke in the area of Molecular Biology and Expression.

Along with his research he served on the Athena Swan Committee helping to improve gender balance and participation in the sciences. He was also a member of the Safety Committee and worked hard to ensure the safety of the laboratory work environment.

“Kevin attended many conferences and workshops in Switzerland, Oxford and Cambridge. He would tell us that he had coffee with Professor this or that, some of them Nobel laureates but all coming under Kevin’s spell. He had a very keen intellect, he was able to link abstract ideas and make them real and apply them to his area of research. He was a genuine true scientist with huge potential,” recalled his PhD supervisors.

Since his death, Kevin’s parents James and Catherine have been committed to raising awareness around SADS and the work done by staff at the Family Heart Screening Unit in Heart House, Dublin, and researchers in the Mater hospital.

“People may be shocked to learn that it is estimated that at least one young person dies of SADS in Ireland every fortnight. Researchers at the Mater hospital are working tirelessly to try to find the causes of SADS and to help identify those most at risk,” explained Mr Hayes.

“As Heart House is entirely reliant on charitable donations myself and Catherine are going to organize a couple of events for the purpose of fundraising for this very worthy cause. This silent killer strikes down young persons that otherwise appear to be healthy and fit.

“Some of the symptoms associated with this condition can be picked up with a simple Electrocardiogram test and I would strongly encourage everyone reading this article to have an ECG test done,” he continued.

Catherine Hayes along with her friend Margaret Moloney have organised a hill walk around Slieve Felim Loop on Saturday November 3 as part of the awareness and fundraising campaign. A celebrity charity golf classic is also being organised by the Hayes family in Ballyneety Golf Club next year to mark Kevin’s second anniversary.