County Limerick ‘champions of the world’ are honoured with civic receptions 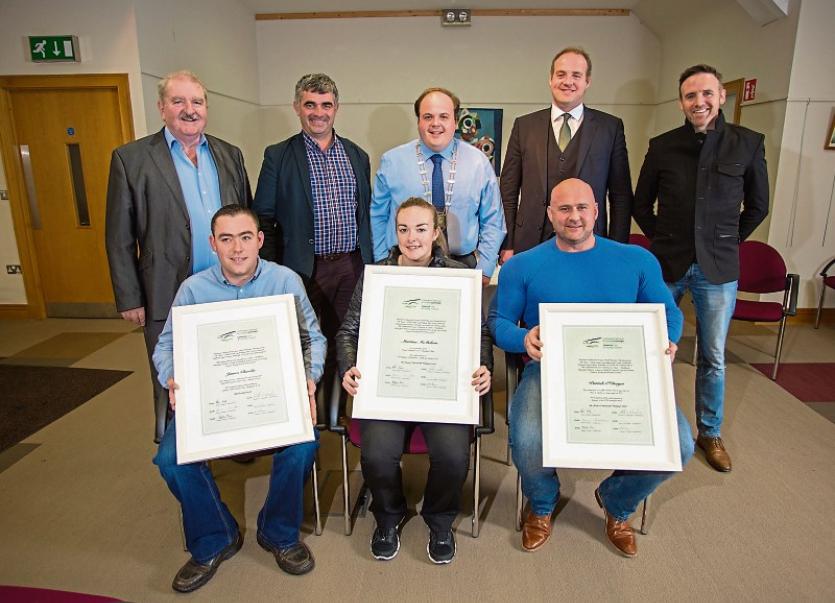 HUMOUR, achievement and ambition were the golden thread lacing together a civic reception in honour of three sporting champions which took place in Rathkeale this week and where local councillor Adam Teskey sent out the message:  “In this area, we have champions of the world.”

“It is fantastic to see young individuals such as you representing our country, our county and our local area in the manner in which you have,” said Cllr Teskey who is chairman of the Adare Rathkeale Municipal District which honoured the three champions.

He wanted, he said, to celebrate their distinctive achievements and to acknowledge the hard work, commitment and dedication which each had demonstrated to realise those achievements.

“Martina,  if there ever was a person to define the word dedication, I think you must be up on top,” he said to the Croagh-born young woman who now lives in Newcastle West and is a member of Broadford Handball Club.

Martina, he added, was a role model for all young women. She beat off competition from 11 other countries to win the world championship open titles in the US in August and her challenge now, she said, was to retain them.

Rooska-born Patrick O’Dwyer, now living in Rathkeale, became the first Irishman to take the UK Strongest Man title earlier this year. In doing so, he beat the European and Russian champion and has set his sights on becoming the world’s strongest man in 2019.

“I think the only thing I have in common with you is your daily diet,” Cllr Teskey joked to much laughter.

“Like you, I obviously  exceed the daily intake, but to the best of my knowledge I have yet to try horse meat, which I believe is a regular ingredient in your diet.

“You can lift well in excess of 450kg and pull a truck weighing over 25 tonnes.”

If his tractor ever got stuck, Cllr Teskey laughed, he knew who to call.

Patrick, a former firefighter, trains up to 30 hours a week and coming up to competition eats eight or nine meals a day.

Rathkeale-born James Chawke won the Manx Grand Prix TT in August, a win  which he described as “brilliant”.

Still only 26, he has been racing since 2008 and is now setting his sights on going professional in 2019 and a Supporters Club is being set up to help him achieve his ambition.

“I have had a few broken bones,” he admitted but remains undeterred.

“James, I have known you for years and I have seen you excel from the fast speeds of a Ferguson 20 tractor all the way to a Renault van and when I read you achieved an average speed of over 117 miles per hour I thanked my lucky stars that I never was a co-pilot either on the tractor or in the van,” Cllr Teskey joked.

“The day you were welcomed home here to Rathkeale spoke volumes for what this town is really about,” he said, before calling on local and national politicians to make motor bike racing an officially recognised sport in this country.

Tom Neville TD and Cllrs Kevin Sheahan, Richard O’Donoghue and Emmett O’Brien all paid tribute to the three champions who were then presented with scrolls of honour, the highest civic accolade the Adare Rathkeale Municipal District can bestow.