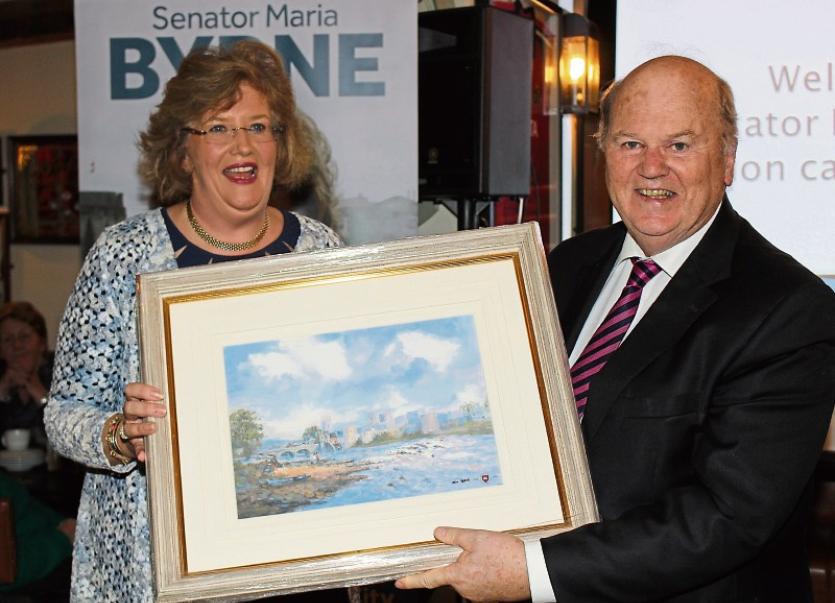 WHILE THE Fine Gael party is officially putting on a unified front, supporters of Senator Kieran O’Donnell are furious that TD Michael Noonan is fully endorsing Senator Maria Byrne to replace him in the next general election.

In an interview with this newspaper, before the launch, Michael Noonan said Sen Byrne deserves the vote because she is “one of the two candidates from the main government party” and that she has a good political record as councillor and mayor.

During his five-minute praise of the senator at the launch, Deputy Noonan said: “I couldn’t think of a better or nicer person to succeed me in the Dail, and I know everyone here tonight has the same view.”

According to a reliable party source, this comment by Noonan irked a number of staunch O’Donnell supporters who described the intimate election meeting as “partisan”.

According to another source, it is widely known in political circles that there has been a rivalry between Deputy Noonan and O’Donnell supporters through the years.

But Sen O’Donnell, who narrowly missed out on a Dail seat in the 2016 general election, said that he values his constituency colleagues.

“Michael and Maria are my constituency colleagues. I have always worked, we have worked to obviously ensure that we represent the people of Limerick City constituency to the best possible way, and I have no doubt that we will continue to do that.

“We’re in, obviously, the countdown to an election. Both Michael and Maria have been both colleagues of mine for many years, and I very much value that, and we will continue to do so,” Sen O’Donnell told the Leader this Wednesday afternoon.

Another party source did not believe the election meeting was a sinister affair.

“Historically, they have always worked independently. It was Maria’s night and I wouldn’t have taken any issue with it. I would prefer if that was kept out of the media, it wouldn’t serve any good purpose. Any mention of any kind of rift would only serve to create a greater rift. Whereas we should be united in going forward and elect two really good people into Fine Gael. And I think they are very strong candidates.”

She said it was appropriate for the former minister to launch her campaign, as she has been involved with him since he was elected 1981. She mentioned her late father and former mayor, Bobby Byrne, as an inspiration.

In Michael Noonan’s closing speech at Bobby Byrne’s, he said: “I would like that Maria would be in the Dail, to continue the work for Limerick that I had started. We need someone of confidence and vitality to continue to drive the agenda forward, and I think Maria is the person to do that. So, you have my full support Maria. I couldn’t think of a better or nicer person to succeed me in the Dail, and I know everyone here tonight has the same view.”

Sen Byrne and Sen O’Donnell were selected in December 2017 to contest the next general election for Fine Gael.