Limerick Person of the Month: Hurlers honoured for epic win which lifted county 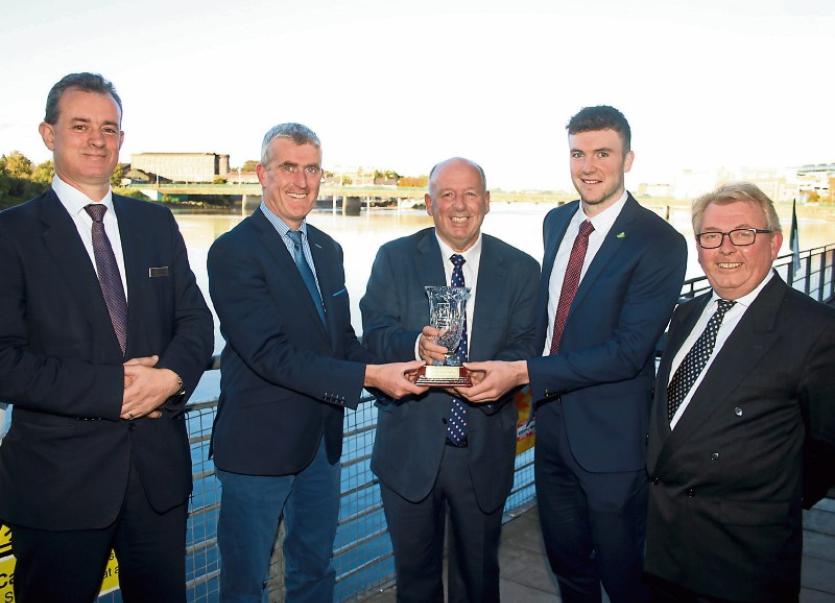 THE “phenomenal stories” which are coming to light in relation to the days before and after Limerick’s historic All-Ireland final victory are worthy of a research project, according to the Limerick hurling manager John Kiely.

“I’ve heard a lot of really, really fascinating stories and I think it would be nice to get them all documented and put together in a publication as something to have. I think there is actually a research project there for someone to go and do in terms of bringing together a compilation of all the different stories around the days leading up to the final and post final,” said the Galbally native.

The man who guided Limerick to their first All-Ireland title in 45 years was speaking at the Clayton Hotel this week where along with team captain Declan Hannon he accepted the Limerick Person of the Month award for the team’s much feted achievement.

Seated on one of the couches in the hotel lobby, the winning manager and captain reminisced on what has been a remarkable few weeks in Limerick's sporting history.

“People from different villages and parishes around the county all have their own stories,” said John.

“We had a couple of guys who had a 1973 Ford Cortina that they drove to Dublin on the day. Four of them set off - four very unlikely characters setting off to the All-Ireland, a Tipp man and three Galbally men,” he smiled. “They struck for Croke Park and they had to get a van to come back to take two of them because the car was struggling a bit. They still managed to get the car to Dublin, drive it up O’Connell Street and out to Croke Park. And there is a hell of a lot more to that story that I don’t know but they know,” he laughed.

Declan, who had the honour of being the first Limerick man since Eamonn Grimes to life aloft the Liam MacCarthy Cup in the Hogan stand, is taking great satisfaction from the boost the win has given the people of the county and city.

“There is a lady in Adare, Mrs Kennedy, she used to go to all the matches and I remember calling down to her after the All-Ireland final and she just burst into tears, she was so delighted. It’s great for those kind of people who are real, genuine supporters who have been following Limerick through thick and thin.”

The reaction to the Liam MacCarthy cup, Declan says, is remarkable.

“If you put it on the table there, there could be a 1,000 people gathered around in 20 minutes. It’s been a lifetime of waiting - 45 years so everybody wants to touch the cup and get their picture with the cup and we’re delighted the cup is going around to all the schools and colleges and clubs - they’ll all get a piece of it, eventually.”

While many supporters have had the chance to re-watch the final umpteen times, John and Declan have yet to sit down on their own and dissect the action.

In the immediate aftermath of the final John was struck down with a chest infection and since then the father-of-two who is principal of The Abbey School in Tipperary has been on the go, non -stop.

“We were running hard for the guts of two years without stopping to pause and when the final was over then and we had a few days at home I suppose the system kind of crashes a little bit, ” John said of the unfortunate chest infection.

“I had a few of my friends at home who came back to the house after the homecoming in Galbally and we had a few drinks and sat down and watched the match in the sitting room. We had right craic, great fun, couldn’t get them to get out of the house then, that was the problem,” he smiled.

Declan, meanwhile, has earmarked Christmas Day as D-Day to sit down on the sofa and press play.

“It’s the same as John, I haven’t had the time to watch it. Any evening I’ve had off, I’ve fallen asleep on the couch. You are trying to recover and I’m back to work as well.”

Declan works in the area of recruitment with UniJobs based in UL.

“They have been great to me in the lead up to the match and afterwards because it’s been very busy. They have been very accommodating and I obviously really appreciate it.

“It’s intense but it’s great too. If we didn’t win the match we wouldn’t be in this position. It’s tiring on the body but we’d prefer to be in this situation rather than looking back on the match having lost.”

Just last week the Economic and Social Research Institute launched a report into the demands on modern inter-county players. When asked which area he feels needs most immediate attention when it comes to player support and welfare, Declan drew attention to students.

“I remember when I was in college I couldn’t have a part time job it was just impossible,” said the Adare man who studied English and Psychology at Mary Immaculate College.

“You just didn’t have the time,” he insists. “I think it’s harder on college lads because they have no real income obviously, if they can’t have a part-time job.

“I remember I used to work in a petrol station in Adare and you were chopping and changing your shifts all the time. It just doesn’t work. And the way it is now, you are training five or six days at least a week.

“It’s not too bad for the lads working nine to five or eight to four but I think there could be something in place for the college lads to help them and to give them some sort of an income throughout the year. It’s expensive enough trying to eat properly and going training and these things. So I'd say the college lads need a bit of a hand.”