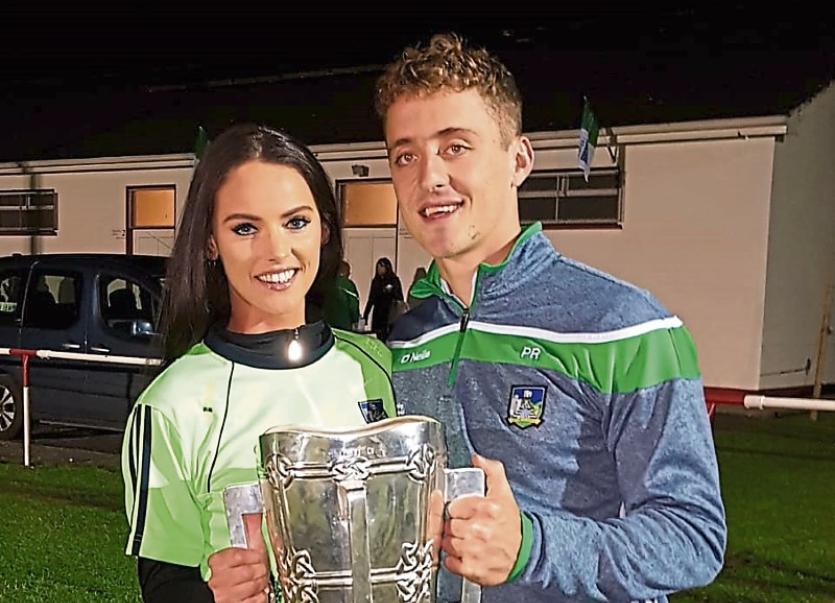 Sister and brother, Amy and Pat Ryan ‘Simon’, from Doon, both won in Croker

WHEN Limerick and Doon hurler Pat Ryan “Simon” describes a marker as “hard as nails” you think of Sean Finn or Mike Casey but he is talking about his sister Amy.

All-Ireland medals in Limerick are rare commodities but the Ryan siblings won two in a matter of weeks. Pat did the business with the Limerick hurlers and then Amy followed up with the ladies footballers.

“Everyone keeps saying it to us but it hasn’t really sunk in for us yet. Two All-Ireland medals in the one house is unreal. We did nothing but eat, sleep and train but it paid off and we are absolutely delighted. It has been an amazing year. Mam and dad are over the moon,” said Amy, who is a mum herself to two boys - Billy, aged 7, and Tommy, 4.

“My eldest was on the field on Croke Park both times. He was running around and lapping it up. He has a taste for it. He thinks it’s the norm!” smiled Amy, the only daughter of Billy and Kathleen. She has three brothers, Micheal, Liam and Pat.

The SNA teacher in St Paul’s, Dooradoyle, played for Limerick at underage level but at 28 this is her first year playing senior for her county.

“Between the kids, job, playing with the club, life is busy and you don’t really get the time to do anything. I decided to give it a go this year and it was perfect timing,” said Amy.

Where did she find the time for training and matches with two children and a full-time job?

“I don’t even know myself. I’m looking back thinking how did I make all those nights. My principal John Tuohy [former Limerick camogie manager] has been absolutely amazing. He, the staff and pupils had the whole school done up for me with cards and posters on the Friday before the final.

“Our manager in Oola, Richard Bowles was absolutely outstanding. Myself and the three Oola GAA girls on the Limerick panel - Kathleen Fitzgibbon, Siobhan Moloney, Karen O’Dwyer are the best of friends. We’ve played with the club since we were 11,” said Amy. It is very like Pat and the three Doon GAA lads - Richie English, Barry Murphy, Darragh O’Donovan - on the Limerick panel.

Pat and Amy got their love of the GAA from their mother and father.

“It is nice to give something back to mam and dad. They are the ones who bring you training, buy your gear. You lose more than you win and they are definitely there for all those days. They are big GAA people - they definitely instilled it into us,” said Amy.

As well as Amy and Pat representing their county, Micheal and Liam also played with Limerick from U-14 upwards. Micheal played in the 2005 All-Ireland minor final which is Pat’s first GAA memory. Liam also starred at inter-county minor level.

There is great breeding as dad, Billy won two minor and an U-21 county final with Doon. His brother Pat captained the Limerick minor team in 1971 and came in to the senior set-up in 1974.

Amy said she and Micheal, Liam and Pat were all encouraged to play sports by their parents when they were children. Being up against three future Limerick hurlers in the back garden was no bother to Amy.

“I gave Pat an awful doing. Pat was the baby. I was definitely the boss. When you have no sister, growing up with three brothers is ‘challenging’ we’ll say. We were out morning, noon, and night. We played hurling, football, if Wimbledon was on the telly we were out with rackets,” said Amy.

Pat describes his sister from those childhood games as “hard as nails”.

“I was nearly more afraid of her than I was of Micheal and Liam! It all started off with Micheal when he was on the minor team in 2005. It was my first ever time in Croke Park. I was 10 years of age. My first GAA memory is of Micheal playing. He paved the way,” said Pat.

Four Sundays after Limerick’s All-Ireland win over Galway, Pat was back in Croke Park to see his sister and teammates take on Louth,

“It was a lot different heading up to Croke on the train and not going playing. It was a nice experience. It was a lot more chilled out. I bought a Subway before I went in to Croke park and I ate it while I watched the match.

“I was delighted for her. She has been a good footballer for years. She was the first girl from Doon to play in the primary game in the 2003 Limerick v Cork Munster final,” said Pat. He and Micheal and Liam represented Doon CBS in the primary games. Pat has had more time for the All-Ireland success to sink in than Amy.

A Doon victory for the first time ever in the Limerick senior hurling championship would make it the perfect year for the Ryans.

“That has always been the main dream. I would have said that the day before the All-Ireland final with Limerick,” said Pat.

Their mum, Kathleen, is as proud as punch of all her four children despite them wearing Limerick jerseys!  She had family come back from America, Australia, England and all her Tipperary relatives even wore Limerick jerseys for “one day only”.

“I’d like to thank everyone for all their support and best wishes. It’s been incredible. Jimmy Finn, the youngest winning Tipperary captain of an All-Ireland winning team in 1951, rang to pass on his best wishes. That was special. That’s what the GAA means to us,” said Kathleen.

When Pat and Amy get a picture taken with the Liam MacCarthy and West County Hotel Cups it will be treasured forever.