WATCH: Expansion of Limerick’s Troy Studios could see it become largest in land 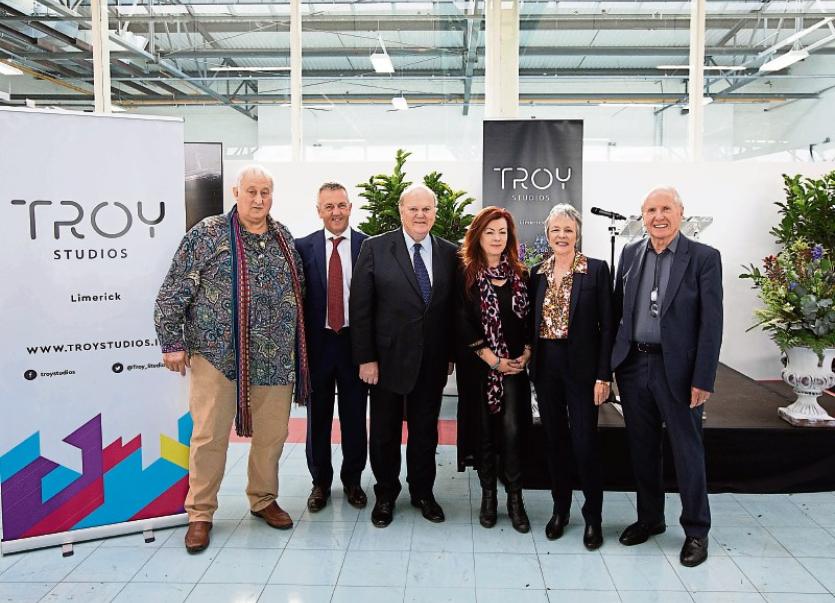 TROY Studios is aiming to pitch for “much bigger movie projects” after revealing major expansion plans this week.

The studio’s chief executive Siún Ní Raghallaigh and chairman Joe Devine revealed the plans during a special event this Monday to unveil a blueprint to double the studio’s footprint by adding a sound stage.

The move, it is hoped, will lead to year-round production at the state-of-the-art studios, as well as creating 800 jobs – and a ​€100m spin-off to the local economy.

Up to 150 construction jobs could be created initially as part of the multi-million euro blueprint, which will add a fourth sound stage to its offering, bringing its sound stage space to 100,000 square feet.

It’s hoped the first productions at the extended facility will roll in early 2020.​

The move, Joe Devine, Troy's chairman said, will see the facility become “the largest international standard film and TV studio on the island”.

“Quite critically, the additional space will enable us to host more than one significant production at a time, thereby ensuring maximum occupancy and employment. It will generate multiples of what was generated by Nightflyers,” he said.

During filming, Nightflyers, from the mind of Game of Thrones author George RR Martin - a psychological thriller described as ‘Psycho in space’ and set to air this autumn - provided employment to 325 people.

It is anticipated €100m of local value will be created with the additional studio space, and up to 800 people could be working in the studios at any one time on a number of productions.

“Today's announcement is another step to place Limerick and Ireland on the global film and television map,” Mr Devine added.

Ossie Kilkenny, the director of Troy Studios, thanked those without whose help the facility would never have happened.

These included council chief executive Conn Murray, who he jokingly said should have a statue erected in his honour in Limerick city.

Ms Ní Raghallaigh added: “This move is significant as it means we can now pitch for twice the amount of work. We can double up on Nightflyers, and look at much bigger movie projects. It opens up our market. For me the ambition is we have a continuum of production. It’s all about the pipeline of productions coming in. We are working very hard on that. What you see here is a physical manifestation of what we are trying to do in terms of encouraging that large scale production coming into the Mid-West.”

Ms Ni Raghallagh has representation in Los Angeles and London, and is tracking projects happening globally.

“We would regularly meet with all the major studios and streamers such as Netflix, Amazon and Apple TV,” she added.

She declined to reveal how much the latest expansion is costing to the firm – but confirmed that thus far Troy Studios has invested €6.5m in its Limerick operation.

On Friday last, Limerick City and County Council planners cleared the way for the firm’s latest plans by granting the planning application for its expansion.