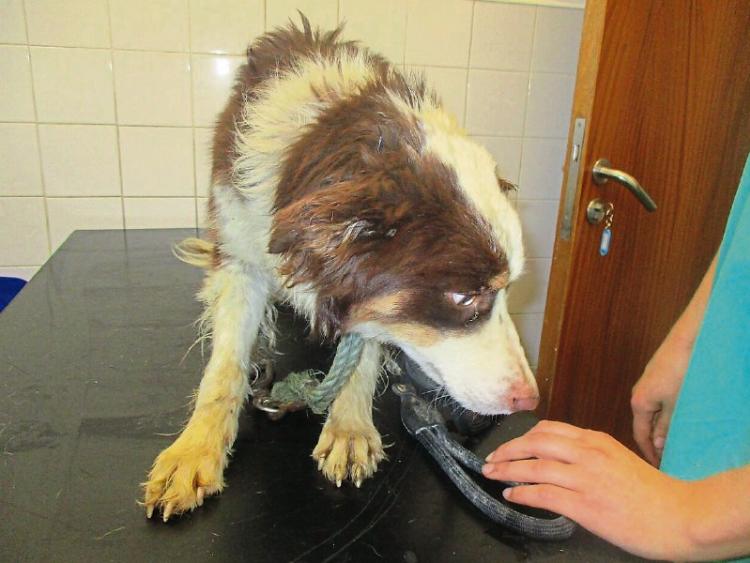 One of the dogs which was rescued from the farm

A SENIOR ISPCA inspector said the way over 30 dogs in County Limerick were “grossly neglected was deplorable”.

Lisa O’Donovan, of the ISPCA, was speaking after Seamus Looby, aged 59, of Raheen, Garryspillane pleaded guilty to a number of offences under the Animal Health and Welfare Act 2013. They included causing unnecessary suffering to dogs, and having unburied carcasses of two adult dogs and one puppy on Mr Looby’s property.

Ms O’Donovan told Kilmallock Court she attended the farm on May 16, 2017, after being alerted by May Humphries, a Limerick veterinary inspector.

Ms O’Donovan said two dead dogs with “bones protruding through their skin” were found. A dead puppy was also found.

In total, 33 live dogs were taken away by the ISPCA. Ms O’Donovan said 16 of the dogs were chained up, 15 were confined and two were very “lethargic and weak”.

“There was no access to water. Dehydration was a big issue. They nearly fought with each other for water,” said Ms O’Donovan.

Thomas Wallace O’Donnell, barrister for the Department of Agriculture which brought the prosecution against Mr Looby, asked that its costs of €1,000 go to the ISPCA.

It was accepted that the dogs did not belong to Mr Looby. Brendan Gill, solicitor for Mr Looby, said that his client doesn’t have a dog which is rare for a farmer. The court heard that the dogs belonged to  the late John Burke, of Duncummin House, Emly, who was found guilty of numerous animal cruelty charges during his lifetime.

Mr Gill said Mr Looby agreed to keep the dogs on an outside farm for “no more than three or four days”.

“It was supposed to be a short term matter. He couldn’t contact the owner. Every day he thought somebody was going to collect them. His own circumstances were not good at the time. He found himself incapable of looking after the animals. He did not want to get anyone in trouble,” said Mr Gill.

Mr Burke later died in hospital and it was agreed that the dogs were on Mr Looby’s outside farm for less than two weeks.

As well as paying €1,000 to the ISPCA in lieu of the Department of Agriculture’s costs, Mr Looby was fined a total of €1,250 by Judge Marian O’Leary. He was also disqualified from owning, keeping or having control of all canine animals for a period of 18 months.

A number of the 33 dogs that were rescued had to be euthanised but the rest were rehomed by the ISPCA.

Speaking after the case had concluded, Ms O’Donovan said: “Failure to uphold the basic level of care of these animals is just not acceptable. The sheer number of them, and the way they were grossly neglected was deplorable. These dogs suffered greatly and it was shocking to see three of these animals had already died. We are grateful to the Department of Agriculture for alerting us to this case and for bringing this the prosecution.”