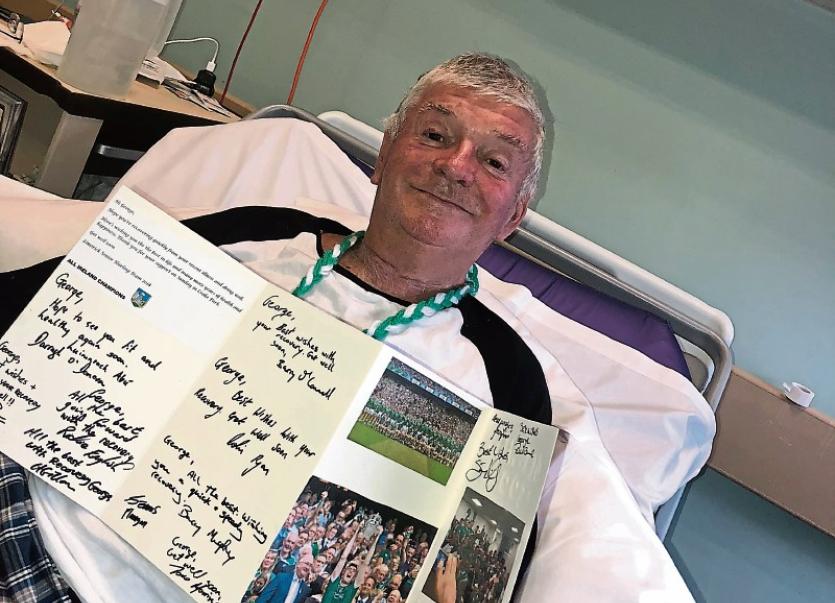 THOUGHTFUL Limerick hurlers sent a signed sliothar and get well soon card to the fan who had a heart attack on All-Ireland final day.

George Barnby, originally from Kileely, collapsed on the Luas after attending the game. The 71-year-old was saved by a quick-thinking Galway nurse, Claire Dolphin. After the story appeared in the Limerick Leader it made national news with George’s daughter, Chloe, and Claire appearing on the Ryan Tubridy Show.

Chloe said her dad “would not be here if it wasn’t for Claire”. The story also struck a chord with the Limerick hurlers who generously sent a signed sliothar and a get well soon card to George who remains in the Mater Hospital.

Kitman, Ger O’Connell organised it and said the players were only too willing it sign it and wanted to send their best wishes after hearing the story.

The inscription inside the card reads: “Hi George, Hope you’re recovering quickly from your recent illness and doing well. Here’s wishing you the best in life and many, many more years of health and happiness. Thank you for your support on Sunday, August 19, in Croke Park. Get well soon.”

It is signed from the Limerick senior hurling team. Players also wrote individual messages in the card.

The special package arrived this week. Chloe said she brought it straight to her dad’s hospital bedside.

“He was delighted! We even had a few nurses from Limerick in to have a look. It really brightened his mood,” said Chloe.

It was a timely boost as George is undergoing heart surgery this week.

“He’s doing great, surgery is on Thursday so fingers crossed that goes well. My dad would like to say thank you very much to the team for the sliothar and card,” said Chloe.

George left Limerick for Kildare when he was a child but remains a staunch Treaty man.

Modestly, Claire, who is a massive Galway hurling fan, said her “training just kicked in” and she “did what anybody would have done”.