WATCH: Limerick nurses 'have been taken for granted over the last decade' 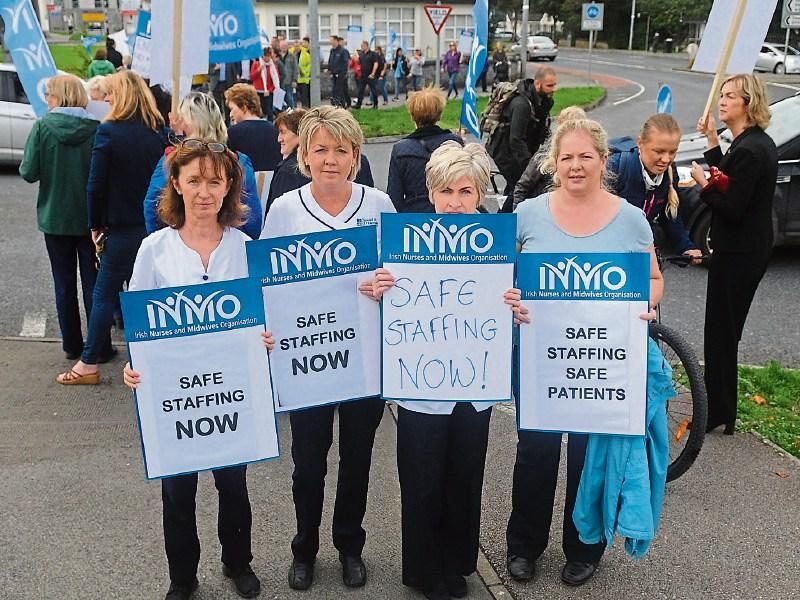 A UNION spokesperson has said nurses at University Hospital Limerick “have been taken for granted” over the past 10 years.

The comments were made at a protest at UHL this Tuesday—led by nurses, Siptu, INMO and local politicians—over a shortage of nurses and a lack of planning ahead of the busy winter period.

More than 50 people picketed outside the entrance to the Dooradoyle hospital, protesting for more beds and additional nurses.

INMO spokesperson Mary Fogarty told The Leader that the overcrowding for the past decade has been a “scandal” and there are not enough nurses for UHL, despite “extensive” recruitment efforts by management.

“This hospital hasn’t had any injection of additional funding for additional nurses to look after the volume of patients that are attending here on the wards, particularly the medical and surgical wards.”

Ms Fogarty said nurses are the “lowest grade” of healthcare professionals in terms of pay.

“They have really been taken for granted over the last decade.”

She added: “They are distressed over the conditions that they find they are left to work in. That’s a major concern. There is a huge morale issue on the ground, they’re definitely is. It is going to take a long time for it to revert.”

Senior theatre nurse Ann Noonan said there is a staffing deficit in “every ward” at UHL.

“They are very disillusioned. If you look at the Public Service Pay Commission, the report was issued last week and the Government said there was no issue with retention and pay was not an issue. As a nurse of 34 years, pay is very much an issue. It’s embarrassing to think, after 34 years of service, that I am on €23 an hour. I’m never going to get a bonus, I am not going to get a golden handshake when I leave. It is disillusioning. I have never in my life got a bonus. So, we want pay parity. I want that the nurse has pay parity when she comes out, with the occupational therapist, the speech therapist, with the radiographer, with the teachers,” she said.

Mayor of Limerick City and County, Cllr James Collins said he was “representing the citizens of Limerick because the people of Limerick have had enough”.

He said after the reconfiguration of the Mid-West hospitals, patients from Ennis, Nenagh and St John’s went to UHL for emergency care.