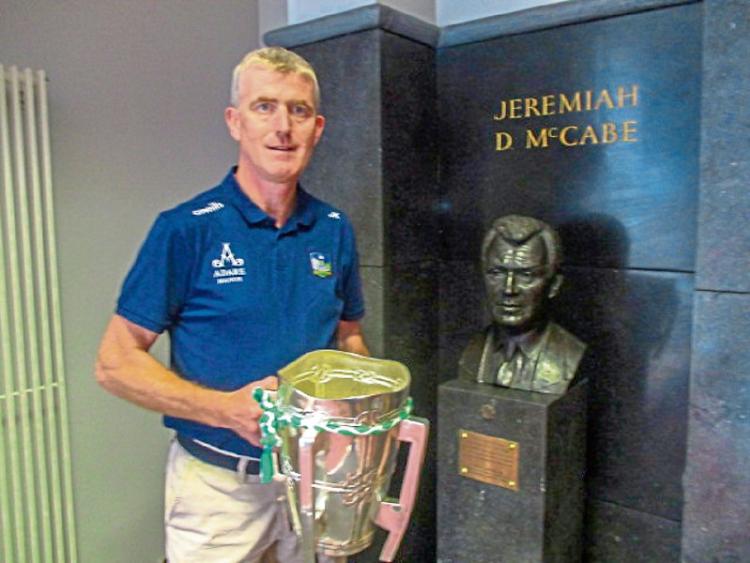 John Kiely with the bust of Jerry McCabe

THE RECEPTION area in Henry Street Garda Station in Limerick was packed to capacity.

There was an air of excitement as Limerick hurling manager, John Kiely, had the Liam MacCarthy Cup in his tight grasp.

Young and old were queuing up to have their photograph taken with John and Liam. Voices were raised as people mingled and enjoyed the occasion. Then suddenly a hush descended.

John had gone over to the bust of the late Detective Garda Jerry McCabe and posed for a photograph with the Cup.

It was a request from Pat Kearney – a brother-in-law of Det Garda McCabe.

“This will mean a lot. I’m taking the pictures home to Ann now. It will be tremendous for Ann and the whole family. I came down especially to get the photo,” said Mr Kearney, the well-known Limerick auctioneer.

He says Det Garda McCabe would have certainly been in Croke Park for the All-Ireland final on August 19.

“Jerry was a great GAA man. He was from Ballylongford which is a hot bed for GAA. He played GAA in his young days but he played rugby then when he came to Limerick with the garda team.

“It is 45 years since Limerick won the Cup and Jerry had been stationed in Limerick for most of his life until his murder in Adare. He was a big hurling fan and he was very much involved in sports. He was a great sportsman. He would would have at the All-Ireland and enjoyed it,” said Mr Kearney, who thanked John Kiely for posing for the photograph with the bust.

“I am delighted that John Kiely stood there with the cup and took a photograph. He is a lovely man. I was telling him he should go for President they are all for going to President! It is a lovely tribute and fair play to John for doing it. He is most obliging with everything he does,” said Mr Kearney.

He said he gave the photograph to Ann and she was “thrilled”.