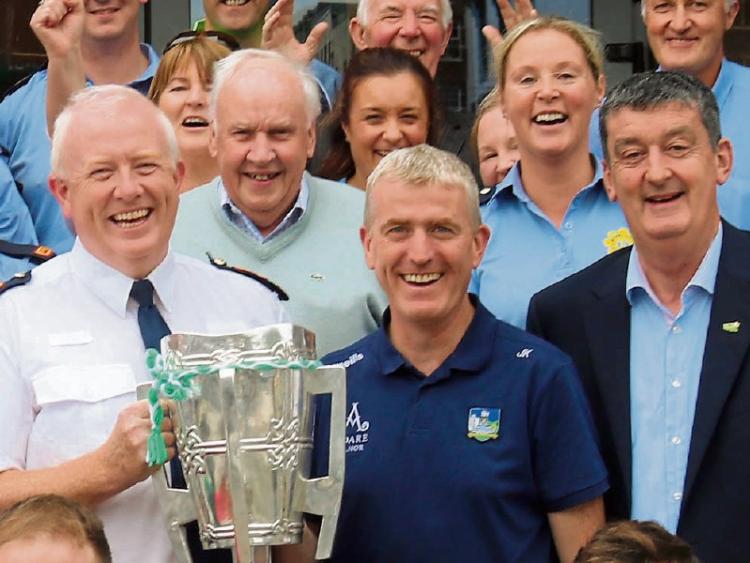 LIMERICK’S hurlers and management have been called heroes but manager, John Kiely, said gardai are heroes every day.

The Liam MacCarthy Cup was brought to Henry Street garda station by management and players this Friday afternoon.

John Kiely made the visit to the station along with coach Paul Kinnerk, Eamon O’Neill, Newcastle West superintendent - who is involved in the team logistics - John Cregan, County Board chairman, and Mike O’Riordan,  the County Board secretary. The  players present included Richie English, Darragh O’Donovan, Shane Dowling and Barry O’Connell. They were welcomed by Chief Superintendent Gerry Roche and Superintendent Derek Smart.

On behalf of the Limerick team and management, John Kiely sent their best wishes to the two gardai hospitalised after their vehicle was struck by a runaway horse in Limerick city in the early hours of Tuesday morning.

John agrees that the gardai are heroes.

“Absolutely, they put their lives on the line every single day and night they go out. They are looking after the people of the city and county. They are putting themselves in harm’s way. It is a high risk job and when you do get caught up in something like the two lads did you do pay a price. We wish them well and a speedy recovery and look forward to seeing them back on the beat,” said John.

The Limerick hurling manager also praised Supt Eamon O’Neill and Conor McCarthy for their role in the logistics team and their incredible attention to detail. He said they had 20 timelines on the day of the All-Ireland final and every one was hit. John Kiely also spoke of the gardai’s involvement and organisational skills in the homecoming parade on Monday evening.