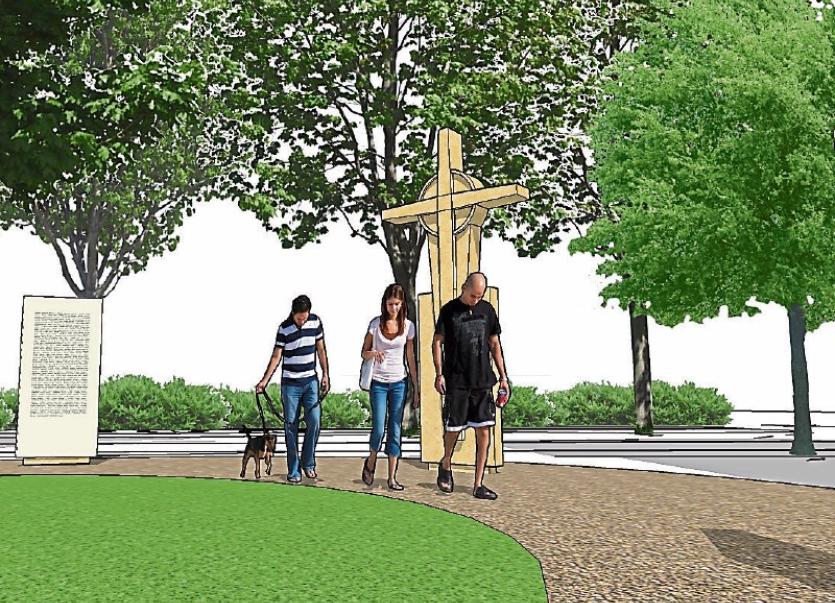 Exclusive: an architect’s impression of the proposed war memorial in the People’s Park Picture: Eml Architects

THE People’s Park could be home to a new war memorial, if proposals submitted to Limerick City and County Council get the green light.

A submission bearing the name of Edmund Pery, the seventh Earl of Limerick, is seeking permission for a structure to honour fallen civilian and military personnel from the city and county in World War One.

The family of Earl Edmund Pery donated the lands of the People’s Park for civic use for Limerick, and this is why it is his name on the application.

At the heart of the memorial would be a four-metre high stone-central cross. As well as this, the plans show eight stone tablets, two metres high, inscribed with the names of all the victims.

The group delivering the project is the Limerick Civic Trust; the plan being one of the principal goals of its new chairman Thomas Wallace O’Donnell for his term.

There would be three stone benches 3.7m long, and 0.45 metres high and associated gravel paths.

In supporting documents provided to council planners by eml architects, it was pointed out that a number of locations were considered for this memorial, including the City Gallery, and around the council’s headquarters at Merchant’s Quay.

“As the memorial commemorates the loss of Limerick people, it must be located in an environment conducive to reflection in a secure, central site, accessible to visitors and locals alike. The People’s Park met the criteria to a much greater extent than any other location,” the document stated.

“The Earl of Limerick was advised of the project and was happy to support the proposal, pointing out that one of the fallen is the grandson of the third Earl of Limerick who leased the land for the People’s Park in 1875. He was killed in 1918 aged 23,” the document states.

Metropolitan mayor Daniel Butler says he would like to have seen more public consultation on this plan.

He added: “For something that has been placed in a public realm, and the nature of what it is, I would have liked to have seen a bit more public input. I’m happy to see us acknowledge who we have lost in the World War, but it’s just about how we do it.”

Council planners are expected to make a decision on the application by Wednesday, October 17 next. Submissions are open until September 25.