WATCH: 'Anything is possible if you want it enough': Liam MacCarthy returns to Limerick city's oldest GAA club 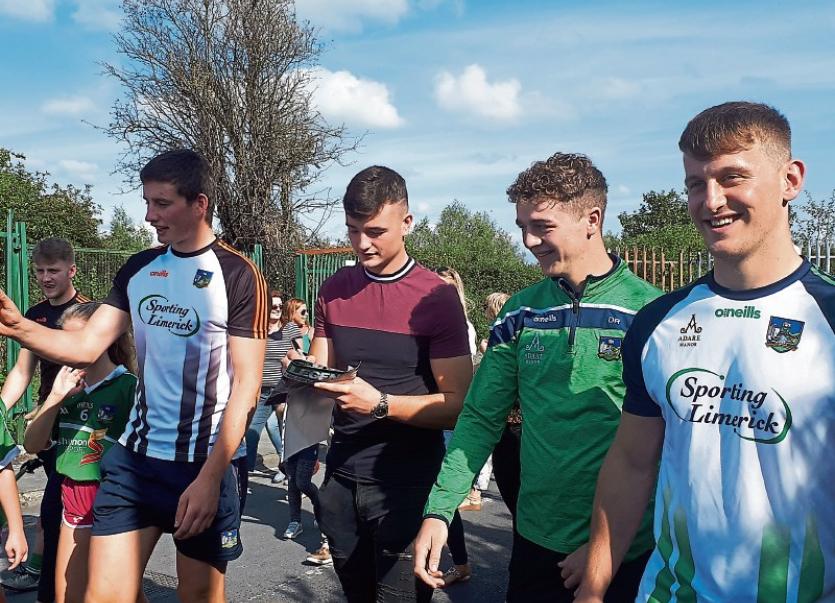 IT may have been almost a fortnight since Limerick won the All-Ireland, but there is no way the excitement at the achievement is going to die down any time soon.

This Saturday afternoon, an estimated 1,500 people were at St Patrick’s GAA Club in Rhebogue to welcome home Liam MacCarthy, and their own right-wing forward Gearoid Hegarty.

It was the first time the hallowed trophy has visited the club, Gearoid being the first ever player to have won an All-Ireland from the side.

Glorious sunshine greeted the day, as the Boherbuoy Band marched down Anglers Walk with the team, carrying aloft the trophy. Members of the city’s oldest GAA side from through the generations gathered on the home pitch, and they were joined by Cllrs Kieran O’Hanlon, John Costelloe and Frankie Daly, all of whom have St Patrick’s affiliations.

Speaking to the Limerick Leader, Gearoid said: “I never in my wildest dreams thought anything like this would ever happen. Standing in behind the Boherbuoy Band at the top of the Anglers Walk, literally, you could puck a ball from my house.”

He declared: “This day is for the people of St Patrick’s – I’m so proud I can bring the cup back to them.

Since lifting hurling’s holy grail in Croke Park, Gearoid has lined out three times – twice in football, once in hurling for his club.

Just six days after playing before more than 80,000 people at GAA headquarters, he was in the Bog Garden in Rathkeale before under 100 people playing football for his club against Fr Caseys.

”It brought me back down to earth! In fairness to the management they left it up to me whether I wanted to play. But I am a proud clubman, and i’m not afraid to say it. I’d always turn out for my club.”

Referring to Cian Lynch, one of seven other panel members who joined Hegarty at Anglers Walk, Cllr Daly said: “If we have the Messi of hurling here, surely Gearoid is the Ibravimovic of hurling!”

Gearoid, a staunch Liverpool FC fan laughed: “I’ve been called a lot worse, so i’ll take that one!

Addressing the crowd, which contained many young St Patrick’s players, he said: “

A former inter-county footballer, Gearoid added he hopes Tyrone can stay in tomorrow’s All-Ireland Football Final “for as long as possible”.

“It’s mad to say it. We’re after winning one, Dublin are on the verge of winning four in a row – what an achievement if they can do it. I know they won’t admit it, but they are 100% targetting to become the first team to win five in a row,” he said. “I just hope it’s a spectacle, but it could turn ugly.”