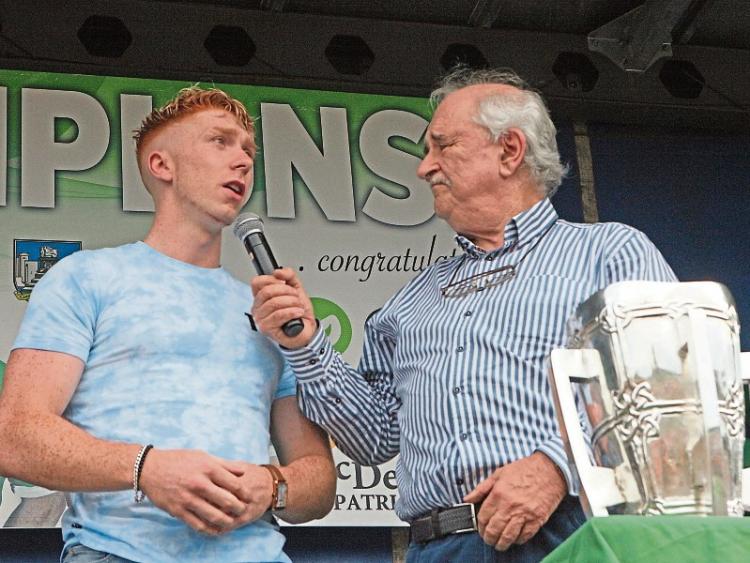 LIMERICK hurling midfielder Cian Lynch has laughed off comparisons between himself and soccer superstar Lionel Messi.

In the days leading up to the All-Ireland final, the Patrickswell man’s uncle, Limerick legend Ciaran Carey, described Lynch as the “Messi of hurling”.

“Ah, Jesus, I’m miles off that now,” he laughed when told of the comparison by the Limerick Leader.

“Come here, it’s all about the team. Every man is as good as the players around him, and credit is due to every lad in this team, the panel and management. Every day, we had our heads focused, and every day someone different stood up and drove things on.”

Cian, alongside his clubmates Aaron Gillane and Diarmaid Byrnes, received a heroes’ welcome on their return to the famous old club, which produced a quarter of the 1973 All-Ireland winning panel – four of whom were present at Liam MacCarthy’s latest homecoming.

He said bringing the silverware home to his club – and a crowd of 1,500 – represented a special moment: “I know it’s great going to other clubs, but coming back to your own place, where we will all be next week, and playing Ballybrown down the road, that’s what it’s all about.”

Asked what is so special about Patrickswell GAA Club, right-wing back Diarmaid laughed: “There is a well down the road opposite Centra and if you take a sup out of that, then you will be alright!

“No seriously, it’s fantastic to have this tradition here.”

He pledged the 2018 All-Ireland title “won’t be the last”, adding: “It’s a true honour and privilege to represent your club.”

A number of other panel members were present at the homecoming, including captain Declan Hannon, Seamus Flanagan and Tom Condon.

Special mention was reserved for the Knockaderry man, whose catch at the end of the game prevented Galway potentially levelling – or even winning – the final.

He said: “We should probably have beaten Galway by 10-plus points. We were by far the better side on the day.”

The panel members gathered by the shrine at the top of the village before travelling by minibus to Patrickswell’s home of Páirc Antóin O Briain.

“This is better than the Pope visiting,” one person, who did not wish to be named, laughed.

Before the players arrived, local woman Sinead O’Brien gave an emotional rendition of the Cranberries ‘Dreams which played after the Croke Park thriller. She also sang the song prior to throw in.

Reflecting on the return to Limerick’s Colbert station last week, Cian said it “gave him butterflies”.

“To come out of Colbert Station and see the crowds, I thought that was it. But driving through town, and going to the Gaelic Grounds, your belly would start, butterflies would be coming. It was a weird feeling, but unbelievable,” he said.

His father, the former metropolitan mayor Sean Lynch admitted in the build-up, he and wife Valerie were “as nervous as Cian was”.

“Saturday was the longest day I’ve ever experienced, and Sunday, I was a bag of nerves, you’re just hoping everything goes to plan. On an All-Ireland final day, you just never know what is going to happen,” Cllr Lynch told the Limerick Leader.