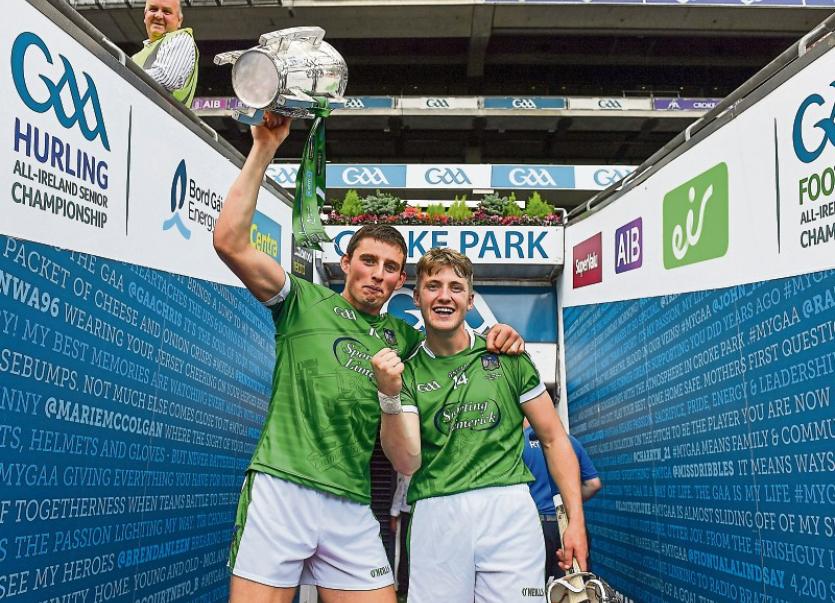 Gearóid Hegarty, left, and Séamus Flanagan of Limerick leave the pitch with the Liam MacCarthy Cup

THE magic, feelgood factor of Limerick’s All-Ireland victory continues and celebrations are still underway as the Liam MacCarthy Cup makes its way deeper into the West.

Over the past week, thousands and thousands of fans came out again and again in towns all over the county to welcome their heroes and  to cheer their success as the Liam MacCarthy Cup visited Kilmallock, Bruff, Doon, Patrickswell and Caherdavin, home of Na Piarsaigh.

Now, that magic is coming west, with it comes an even greater realisation of what the win means, to individuals, to clubs and to communities.

Everywhere there is that strong sense of belonging, of being  united as one team, one people. Everywhere too there is pride. Proper pride. Above all, though, the win has given people heart and kindled and rekindled hope. All things now seem possible. And that is the pure magic of it all.

This Thursday evening, Seamus Flanagan will taste some more of that magic and will be feted to the heavens when he brings the Cup onto his home ground of Feohanagh Castlemahon.

It will mark yet another illustrious milestone in the history of this proud hurling parish which can boast a raft of top players who have done hurling service for Limerick, among them John and Joe Quaid and John Flanagan as well as Seamus Quaid who won his All-Ireland senior medal with Wexford. And nobody is forgetting  the twins, Jack and Jim Quaid, who won Junior All Ireland medals for Limerick in 1954.

“This will be one of the most historic and memorable occasions that the club will ever have the privilege of hosting and everyone is welcome.,” GAA club secretary Frank Reidy said as the club prepared for the event.

The celebrations will take place in Quaid Park, Coolyroe at 8pm and supporters are asked to arrive in good time and to note there will be traffic restrictions at Bunoke Bridge and Cooliska Cross.

They are also asked to use the parking at side of the pitch. There will be entertainment, icecreams, hot food and a shop all on site and a great night is promised as Feohanagh Castlemahon welcomes Seamus and other Limerick players.

On Sunday, Kildimo Pallaskenry will give a hero’s welcome to club member and Man of the Match Kyle Hayes and fellow clubman Barry O’Connell and team-mateAaron Gillane. The homecoming will be of a family fun day in Pallaskenry, starting at 10.30am.

“We are looking forward to the Liam McCarthy Cup coming to the club,” club chairman Emmett O’Brien said. “We are very proud of what Limerick has achieved and very proud to be welcoming All Ireland medals into the parish for the first time in more than 50 years. We are expecting big crowds.”

In Knockaderry, they are also preparing a hero’s welcome for Tom Condon who will bring the Liam McCarthy Cup “home to the higher plateau” this Sunday.

Tom, whose catching of the last Galway free brought the tense extra time of the final to a close and allowed Limerick hearts to beat again, will be accompanied by fellow panel members.

“We will be bringing Tom, the players and the Liam McCarthy through the village on a low-loader so everyone can see them,” Tom Sheehy, chairman of the Knockaderry club said.

"A special platform will be in place in the church carpark," he added.

The home-coming will add huge energy and excitement to the Knockaderry Autumn Fair already scheduled for Sunday and which kicks off at 2pm.

The Newcastle West GAA club is also to get its time with the Liam McCarthy.

Next Thursday, September 6, the club will launch a major fundraiser, The 20k Drop, at the Longcourt House Hotel.

Local figures will launch the fundraising show which will take place in October and those attending will be given a sneak preview of how the quiz show will work.

But it is likely that all eyes will be on the Liam McCarthy Cup on the night.