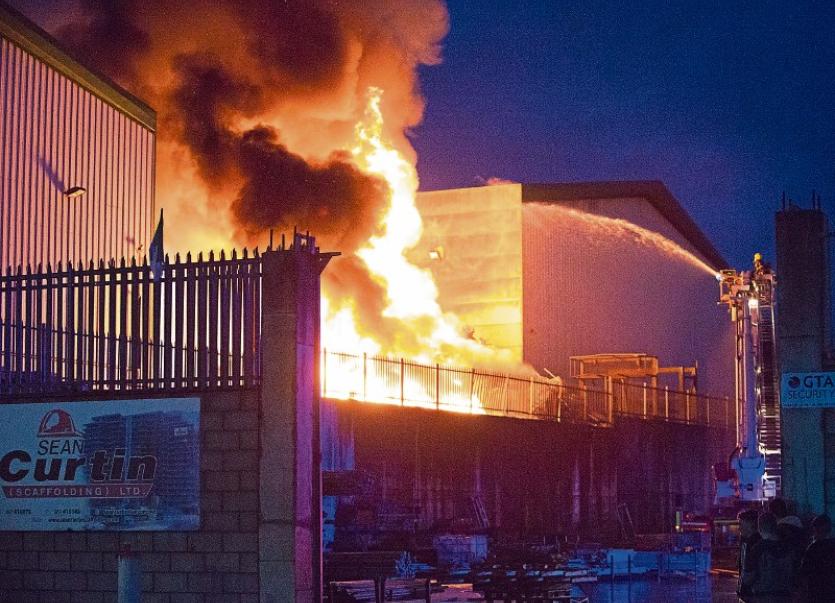 Scene of fire at the Ballysimon Road PICTURE: LIAM BURKE/PRESS 22

A COUNCILLOR has urged Limerick City and County Council to suspend the licence of the recycling plant that suffered a massive industrial fire on Monday night.

Sinn Fein councillor Malachy McCreesh said the licence should be suspended until a probe has been carried out into “the reason for the fires and the health risk to the local community”.

On Monday evening, firefighters were alerted to scene at Urban Metals on Ballysimon Road where a large scrap metal fire occurred.

Twelve units from Limerick City, Cappamore, Rathkeale, Kilmallock and Shannon were dispatched to the scene and were finished at 6.30am.

The damage to the business was exterior and no interior or machinery were damaged as a result. If machinery had been damaged, it could have cost the company hundreds of thousands of euros, according to a source.

This is the second industrial fire in the area in recent months.

Cllr McCreesh, who serves the Limerick City West district, says the fires at the Ballysimon Road “highlight the dangers to the general public” when they occur.

“There is a significant volume of hazardous waste on these sites and fire is the worst possible scenario. The pollution that is emitted has to be life threatening in the long term. The advice from the fire service asking people living in the vicinity of the fire to close their doors and windows as a health and safety precaution highlights how inadequate the procedures are for dealing with the effects of dangerous pollution,” he said in a statement this Tuesday afternoon.

He added that there needs to be more independent monitoring and inspections of these type of waste facilities.

“Allowing hazardous materials to be processed within the confines of populated areas will continue to present health risks.

“Presenting a list of conditions, when granting licenses, is not sufficient to guarantee the process will be carried out in the interests of health and safety. For the most part, all the monitoring and reporting is carried out by staff employed by the facility, with limited inspection by LCCC or the EPA. While calling for more robust independent inspections and monitoring, the only solution that will reduce the health risk to the communities will be to prevent this industrial activity in built-up areas.

Gardai are investigating the fire as a matter of procedure.