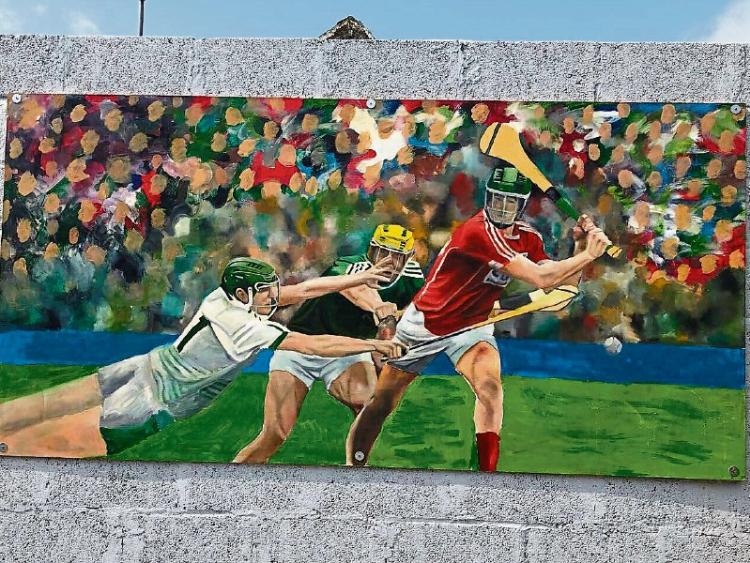 The mural in Davy’s Bar, Effin was painted by award-winning artist Gerry Davis

THE SAVE that was seen around the world was wondrously recreated in Davy’s Bar, in Effin, County Limerick.

When the final whistle was blown on Sunday after eight and a half minutes of injury time, the mural was unveiled to the ecstatic punters of the Effin pub.

The pub is run by local friends of the star goalkeeper Nickie Quaid - Michael Kelly, Pa Kennedy and Tom Carroll - who took over the business in February of this year.

Michael, one of the co-owners believes the mural lifts the spirits of the people of Effin.

“We showed it a half hour after the final whistle, and they loved it, and they’re so proud of Nickie and it’s such a big deal for the parish, people are popping in every day to just see the mural in the beer garden,” he said.

“He’s an extremely popular man in Effin even before he was on Sports Illustrated, who would be very involved with the local club,” Michael added.

The mural which measures 4ft x 6ft was painted by award-winning artist - and brother-in-law of co-owner, Pa Kennedy - Gerry Davis.

The pair met a few days after the semi-final and felt that whether Limerick won, lost or drew in the final, the mural would be a fitting tribute to the Effin goalkeeper.

Davis, who graduated from the Limerick School of Art and Design in 2009, won the Hennessy Portrait Prize and a Merit Prize at the Golden Fleece Award for his painting ‘Séan’ that now hangs in the National Gallery of Ireland.