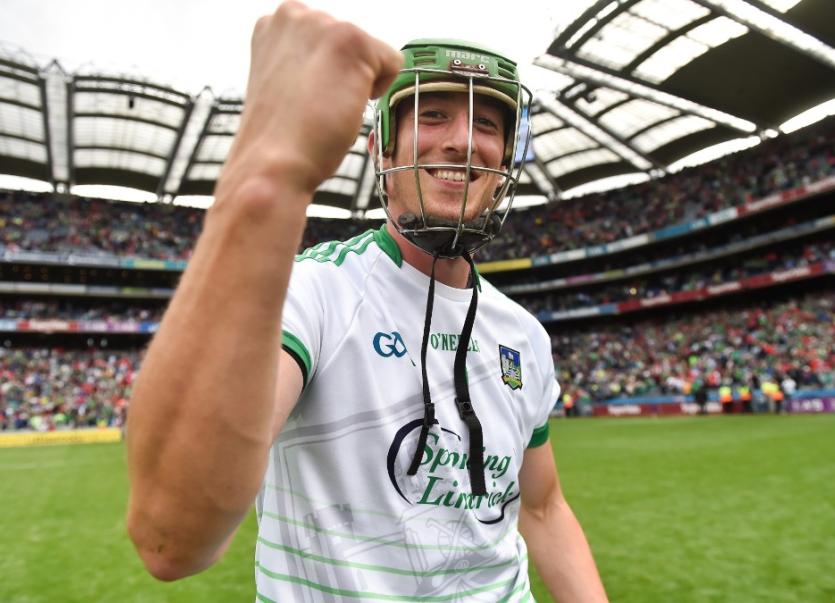 A happy Nickie Quaid after the final whistle in Croke Park

It was an hour after the final whistle when the Effin star emerged from the victorious Limerick dressing room under the Hogan Stand, rightly sporting a broad smile.

“Maybe it was all the years playing outfield of the club and when the ball popped up for him to strike it, I just flicked it away,” Quaid told LeaderSport.

With the All Ireland SHC semi final in the third minute of injury time and the game level at 1-26 each, the Cork support in the Canal End were already on their feet as their captain collected a pass in the goalmouth.

Sean Finn, Mike Casey and Diarmaid Byrnes were covering and Dan Morrissey attempting a hook but it was Nickie Quaid that ensured the net didn’t bulge.

“To be fair to Seamus Harnedy maybe the ball across wasn’t brilliant. He wasn’t able to take it in his hand and it gave me an extra bit of time to come out,” recalled Quaid.

“Look it was great to get the little touch on it and it didn’t go in and maybe if it was a goal at the time we would have been under pressure so I am just delighted it didn’t go in,” smiled the Limerick goalkeeper.

Check out this unbelievable save by Nickie Quaid! pic.twitter.com/Y3deg0CM18

By Monday, Quaid’s save was announced as the Sports Illustrated ‘Sports Highlight of the Weekend’ – the American sports institution is read weekly by 23 million.

In his ninth season in the green and white, Quaid played in losing All Ireland semi finals in 2013 and 2014.

“Its absolutely brilliant – there is no better feeling that the half an hour or the 20-minutes after the final whistle in the dressing room. It’s unbelievable,” he beamed.

“Something I hadn’t experienced up here in Croke Park was winning and it’s absolutely brilliant. It’s new for all of us but a brilliant feeling,” said Quaid.

“It was new to a lot of our lads to play in Croke Park and an All Ireland semi final but some of these lads have won it all underage and it’s great that they just play with a bit of abandonment and history and all that is irrelevant to this group,” he said.

“It’s what you dream of but we will come back down to earth and focus on the next three weeks and get ready for the final.”

He added: “There are no trophies given out here today and we will be back here in three weeks when please god we will have a trophy and that’s the aim”.

“In fairness to the lads when we went six points down with 10-minutes to go there was no panic – we stayed at what we are used to doing and stuck with the plan and thankfully the boys got the few scores to bring us back into it,” explained Quaid.

“There is no panic – when we went down the six points we just knew what we had to do. The boys have us so well drilled in terms of what we have to do and what our role is in the team and we stuck to that. We have belief in ourselves that if we stick to the plan that it will get us over the line.”

Limerick were 1-30 to 1-29 ahead when Shane Dowling was fouled for a penalty two minutes into the second half of extra time.

“Sean Finn and Mike Casey were standing beside me and I said will he go for it and Mike said yes he will. Mike was so definite, so I knew he was going for it. Shane doesn’t miss – he simply doesn’t miss. I knew if he was going for it that he was going to stick it. It was reminiscent of Andrew O’Shaughnessy in 2007,” explained Quaid, referencing the Kilmallock man’s penalty in the 5-11 to 2-15 All Ireland semi final win 11 years ago over Waterford.

“Straight into the top corner – it was an unbelievable penalty. Pat (Ryan) got his goal then to round it all off and what an impact off the bench and that’s just shows how strong the panel is and it’s all about the panel,” outlined Quaid.

The Limerick substitutes accounted for 2-6.

“It’s a serious panel effort – we play inhouse games and it’s those lads that didn’t make the 26 man panel today that drive things on and without those lads pushing everyone in those games we wouldn’t be where we are.”