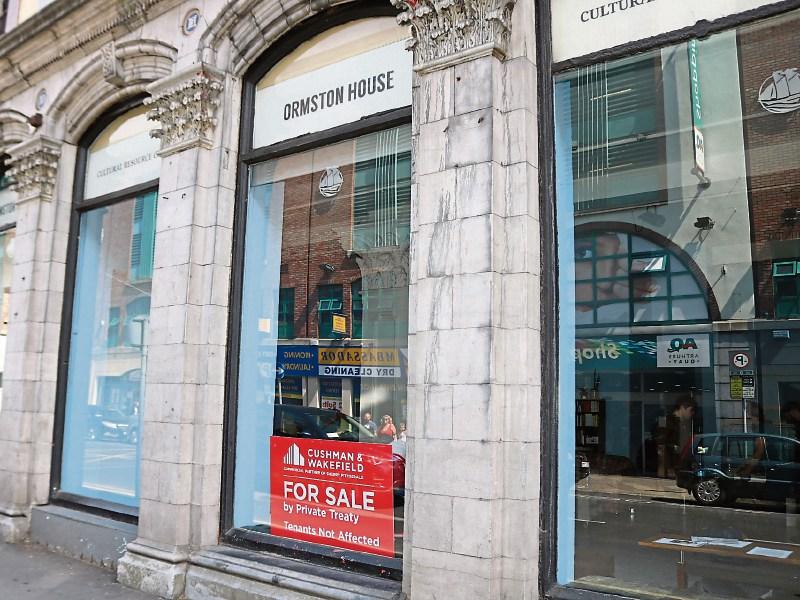 Contracts for the sale of the building occupied by Ormston House are expected to be signed in next two weeks Picture: Adrian Butler

THE FUTURE of Ormston House in Limerick is in jeopardy as a US vulture fund, which owns the city centre site, is just two weeks from closing a deal with a potential buyer, the Limerick Leader can exclusively reveal.

New York firm Cerberus Capital Management, which was involved in the controversial €1.3bn purchase of Project Eagle loans, purchased the loan book from the National Asset Management Agency [Nama] last year, and the site was put on the open market in July 2017.

The sale includes 9 to 11 Patrick Street, two of which are occupied by the artistic space, and one is occupied by a retail unit.

The Leader first revealed that Ormston House was facing possible closure as a result of the site going on the open market.

“There is clearly a need and a desire for us to remain open. While we appreciate that the council have other commitments, there is an urgency to safeguard Ormston House and to see this process through to a swift conclusion,” Mary Conlon, Ormston House’s co-director said this week.

Limerick City and County Council had previously agreed a sale of €275,000 in late 2016 for units 9 and 10, but they disengaged from the deal when number 11 was later included. It is understood that Ormston House raised €150,000 through philanthropic sources and €125,000 was put forward by the council.

A council spokesperson told the Leader that it is “still committed to Ormston House”.

Metropolitan mayor, Cllr Daniel Butler, who is engaging with all parties in relation to Ormston House, said he was “hugely disappointed” with the outcome.

Mayor Butler said he was now making efforts to contact the buyers to see if they will consider a lease agreement or a possible sale.

“I will continue to pursue this until all options are exhausted,” he said.

Culture Minister Josepha Madigan has been contacted about the matter.

Mayor of Limerick City and County, Cllr James Collins has called on Minister for Culture, Heritage and Gaeltacht, Josepha Madigan to intervene, and said the council will need the financial support of her department.

However, it is understood that her department does not have a budget for such capital investment.

This morning I received this response from Minister @josephamadigan office in relation to the proposed sale of @OrmstonHouse. This issue is being taken seriously and I will look forward to engaging further with the Minister on this issue.#saveormstonhouse pic.twitter.com/uiolbzv0Wi

A spokesperson for the Minister said: “A number of public representatives from Limerick have contacted the Minister about the facility. While the Minister has not been contacted by Limerick City and County Council on the matter, she is aware the Council has been in contact with the vendor.”

After the Limerick Leader revealed that Ormston House was facing possible closure, there has since been an outpouring of support in a bid to help “save” the venue.

The Save Ormston House campaign has garnered widespread local, national and international support.

As chair of @OrmstonHouse board, I’m heartened with public support to keep this unique space open and welcome @DanielButlerFG & @LimerickCouncil response to the issue today - it is the unique places that make a city and Limerick’s regeneration needs Ormston. #saveormstonhouse https://t.co/pJW2doINy0

Curator of the Winton Bell Gallery in Rhode Island, Ian Alden Russell tweeted that Ormston House is “an important model internationally for how the arts sustains, creates and repairs our communities”.

Ormston House has hosted 55 exhibitions and 287 events and has worked with 296 artists from 27 countries since its foundation in 2011.

Ms Conlon said Ormston has been "working quietly with the support of Limerick City and County Council and other stakeholders to secure long-term tenancy for several years,” she said.

She said they are grateful for the “extraordinary” public response.

“We have worked hard to support artists, local community groups, and many festivals in the city, and to promote Limerick as a destination for the arts. It is truly validating for the small volunteer team to know that people value what we do and want to see our future secured.”

Ormston House are expected to make a final decision on their operations at a board meeting in the coming weeks, followed by a public meeting in early September to discuss their future.  It is understood that the council, if unsuccessful in keeping Ormston on Patrick Street, will be urged to find an alternative location for the cultural centre by January.

This needs to be stopped immediately- where are the brave civic and political leaders? #saveormstonhouse #dontletstmunchinberight https://t.co/UkKJXvUhCd

#OrmstonHouse has been a friend & supporter of @LimerickJazz for many yrs. Together we have hosted a number of #MusicForKids WS in the space. It would be impossible for @LimerickJazz to offer its programme of events w/o the support of venues like @OrmstonHouse#SaveOrmstonHouse pic.twitter.com/EnVvMvWTEZ

Ormston House has be to saved! It’s been home to two events I’ve held. It’s an amazing space and should be kept for artists! #saveormstonhouse https://t.co/tQgqn7WNDA

So gorgeous to see message and message tweeting in support of @OrmstonHouse - demonstrates so clearly what a valued and respected space and team they have! #SaveOrmstonHouse

Noooooo!!!! ⁦@OrmstonHouse⁩ is a treasure in the heart of Limerick... don’t make the same mistake as Dublin by disregarding the impact of art spaces on the city until it’s too late. #saveormstonhouse https://t.co/q3igfL0g2p

Such beautiful setting for so many events in the heart of the city. Hope the powers that be can save @OrmstonHouse #SaveOrmstonHouse https://t.co/YasSyceI4p