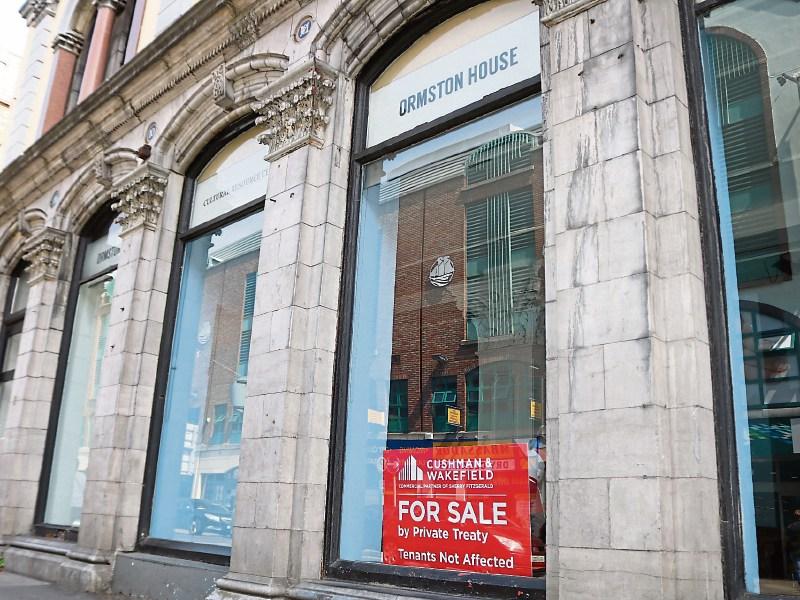 THERE has been ‘a lot of talk’ online suggesting that Limerick City and County Council has no interest in Ormston House, council chief executive Conn Murray has said.

But he rejected that suggestion roundly saying: “It is important that honesty gets back out there in terms of social media.”

“For whatever reason, it was taken away and placed on the open market,” said Mr Murray.

What went on sale, he added, was not the one block the council was interested in, but three blocks.

“We are not interested in three blocks,” he said.

But the council, he stressed was still interested in Ormston House.

“We haven’t gone away. We are still interested,” he declared and he reminded councillors that it was the council that had made Ormston House available for creative and artistic purposes in the city in the first place.

At the weekend, the board of directors at Ormston House announced it was now “operating on a precarious and uncertain basis” as the building was being sold on the open market and they did not possess the funds to match the market price of the site.

“Ormston House Cultural Resource Centre has occupied the building for seven years but faces possible closure. Throughout that time, we have worked hard to become a truly accessible space for the whole Limerick City community. Ormston House is a unique cultural space, operating at street level and open to all forms of creative and community expression. We are proud of our work and grateful to our many supporters in Limerick and beyond,” a spokesman said.

This Monday, Metropolitan Mayor, Daniel Butler said that there had been a huge online outcry over the issue and he urged the council executive to “explore the options for the building”.

“This is probably the most successful artistic venue in the city,” he told the Limerick Leader.

At the full meeting of Limerick City and County Council, Mayor Butler urged chief exective Mr Murray to consider Ormston House on the list of suitable projects for funding under the national €2bn fund for Urban Regeneration announced by the government in May.

Cllr Seighin O’Ceallaigh said Ormston House is “one of the few few places that isn’t a pub” that is open in the city after 5pm and there could be up to 100 people there.

But Mr Murray said Ormston House was “not a suitable project of scale” for this particular scheme.

But, he repeated: “That doesn’t mean we are not interested.”

Mayor of Limerick City and County Cllr James Collins has called on Minister for Culture, Heritage and the Gaeltacht, Josepha Madigan, “to help the Council save Ormston House”.

“Limerick Council has been very supportive of Ormston House, and our funding has helped Ormston House to operate as a cultural resource centre in the heart of Limerick City since it opened in 2011,” he said.

“However, the great work that has been done over the past seven years is now under threat because the buildings Ormston House operate in are up for sale as part of a package of three buildings: numbers 9, 10, and 11 on Patrick Street. Numbers 9 and 10 operate as an arts and cultural centre supported financially by Limerick Council. However number 11 houses a commercial business and the owners of all three buildings want to put them up for sale as one package.

“I’m calling on Minister Madigan to support the work that Limerick Council has been doing through centres such as Ormston House, to cultivate, grow and support the arts and culture community in Limerick.

“The board of directors of Ormston House are to review their operations at the end of August. It would be a tragedy if they could not continue their good work.

“I would like to formally invite Minister Madigan to visit the centre and see the work it has done, and meet with a Council delegation to see where Ormston House’s work fits into the Council’s policy of support for local arts and culture,” he added.