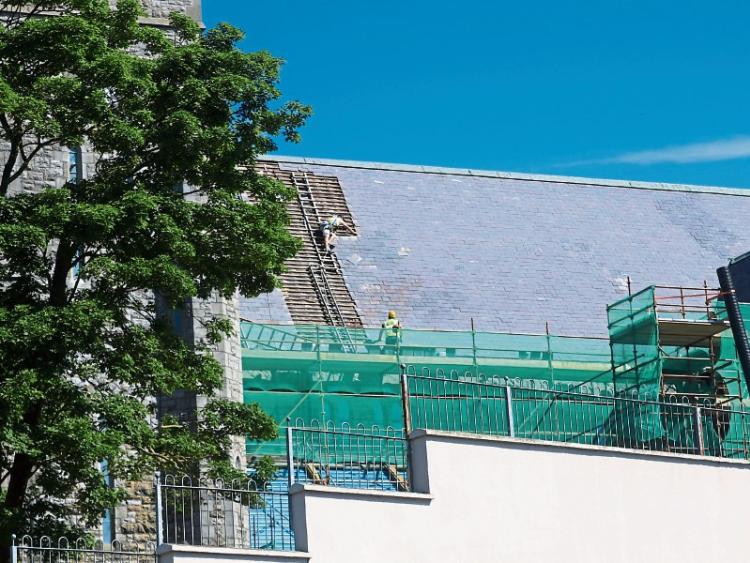 The dry weather really is a ‘blessing’ for workers tackling the roof damage Picture: Michael Cowhey

THE view of the town of Rathkeale from afar would not be the same without its famous hilltop church, and it is this church that is currently in need of major repairs.

Rathkeale’s parish church, St Mary’s, has suffered major damage in the extreme weather of recent years, and thousands of euro now needs to be raised to “preserve it for future generations”.

Fr Liam Enright said that works are being carried out now on the most exposed side of the roof, which has been particularly damaged.

“It’s a constant worry and concern that I would have, whenever we would have high winds or storms. It’s where it is located. I’ve seen slates peeling off myself, because they are up there so long, the nails were corroded,” said Fr Enright.

“The church is so beautiful. It’s so exposed and it’s on a height, so it’s wonderful to look at, but damage is happening. Water was getting into the interior, and there was dampness coming through in recent months,” added the priest.

“We also had, over the long winter, a number of substantial leaks, which was causing great concern. Also you would be concerned about slates falling and the danger that could pose for people as well.”

“We are hoping to do a number of fundraising activities over the coming months. We have a ‘sponsor a slate’ programme running right now. For €5 you can sponsor a slate. It’s going well, but we need roughly about 3,000 slates,” said Fr Enright.

“We are also having a Sale of the Century on September 9 in the community hall in Rathkeale. It would be a sale of work, but on a bigger scale. All donations of items are welcome, they can get in touch with myself or send us an email (rathkealeparish@gmail.com).

To sponsor a slate, parishioners or those who wish to contribute can get in touch with Fr Enright.

“It’s just a wonderful building. We just want to let people know that this work is ongoing to get to the root of it, for future generations. Because I believe we have a duty of care to take care of what is passed on to us. And yes, the church is a building, but the church is also community, and it belongs to the whole community, so we need everyone to get behind it,” added Fr Enright.