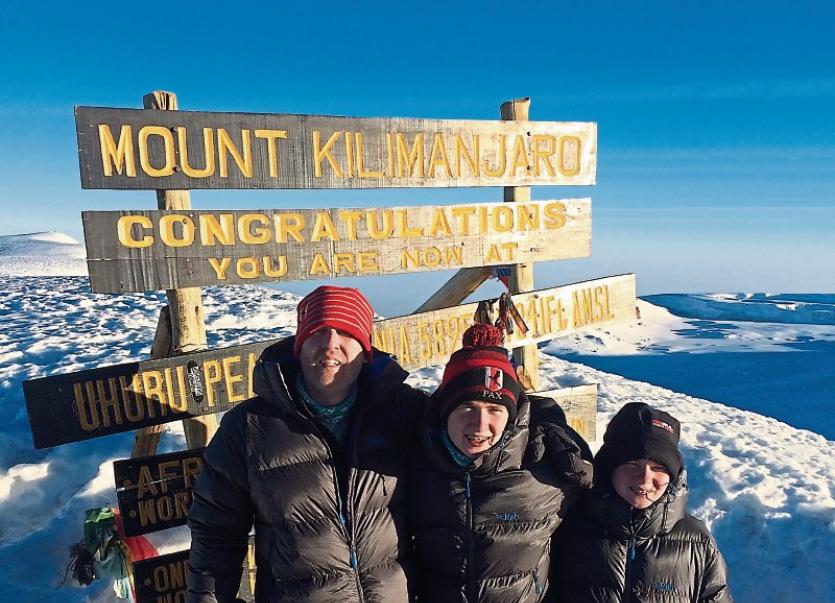 John, Matthew and James Cannon, Annacotty, at the summit

WHEN fifteen Glenstal Abbey students are asked by their teachers in September if they did anything interesting over the summer there will be a resounding “Yes”.

A school party made up of teens, six parents and two adults climbed Mount Kilimanjaro, donated laptops to Tanzanian pupils and taught them how to use the computers.

Matthew Cannon, aged 15, from Annacotty and Peter Fahy, 16, Mungret, both said they are now different young men to the ones that flew to Africa in June.

Matthew said: “It is a life changing experience - one that you are going to remember for the rest of your life.”

While Peter said: “Mind over matter is what it taught me – that you can do anything you want to do.”

The adventure was thought up by Glenstal Abbey School’s director of extra- curricular activities, Benny McEvoy and director of finance, John Cannon.

John said they wanted to deliver something that was a little bit different from a learning and leadership perspective to the students.

“The company we did it through, Earth’s Edge, do expeditions all around the world. Benny and I wanted to find out what would be suitable for a schools group. Their managing director, James McManus does Kilimanjaro on a regular basis. He said it would be sufficiently challenging and inclusive. We’ve quite a broad range in terms of age groups. We had kids from 14 up to 17 and had six parents as well,” said John, who had sons, Matthew and James, 14, accompanying him.  Garrett Hartigan and son Conor, Lisnagry, and Peter Fahy completed the County Limerick contingent.

They trekked for seven days to reach the summit of Africa’s highest mountain. Leadership tasks were assigned to them every day.

Benny said they rose at sunrise, had an hour to eat breakfast and prepare, then they were off.

“On average, we were climbing for six hours everyday with some of the climbs up to nine hours. You start at 1,800 metres which is twice the height of Carrauntoohil and you progress up to 4,800 metres,” said Benny.

Home and altitude sickness, aching bodies, thick snow, ice and minus 20 degree temperatures near the top were all faced down by these boys still too young to vote or drive a car. Getting to the top made it all worthwhile.

Benny said there was a huge sense of achievement when they reached the summit at 7.30am.

“We had been marching all night, there had been various challenges on the way up to the summit. They surmounted them all,” said Benny.

John jokes that it is rare when kids show any sort of emotion at that age.

“They actually gave me a hug which is quite unusual for teenagers,” he smiled.

For John, the feeling was relief.

“I was just so relieved to get to the top. I found it physically and mentally exhausting.  I thought it was horrifically difficult that last night.

“The views at the top were just spectacular. Even though it was minus 20 at the top you are looking across Africa. It was amazing irrespective of how exhausted you are. The kids probably learned to get through the exhaustion and their physical capabilities were a lot more than they anticipated.  That’s a great boost for them to recognise that. A lot of them wanted to stop at different stages and they all got through that,” said John.

Benny said there was steely determination among all of them to complete the task.

If climbing up a mountain on their summer holidays wasn’t punishing enough, they also had their mobile phones taken off them for the two weeks.

“They got on much better, you could hear them joking in their tents, and even in the mess tent when we dined at night there was far more laughter and fun,” said Benny.

John had an another unusual experience when they got home!

“My two boys were debating Lord of the Flies over dinner because they both read it while they were away. I couldn’t have paid them to read Lord of the Flies before! In the evening all the boys played cards or chess or read books,” said John.

After the descent, the students were back in the classroom but of Kaloleni Secondary scool in Arusha. Prior to the trip they fundraised to purchase 15 laptops. They gave one-to-one tuition on how to use them. The association between Glenstal and Kaloleni will continue in the future.

Matthew Cannon and Peter Fahy described it as “eye opening” and both would like to do more charity work after this experience.

Peter said they have nothing compared to what to we have in Ireland.

“But they are so happy with what they have. It definitely makes you appreciate the nice things at home. They don’t have any of those,” said Peter. The two say the expedition changed them.

A fitting quote from Lord of the Flies to end with is, “Fear can't hurt you any more than a dream”.