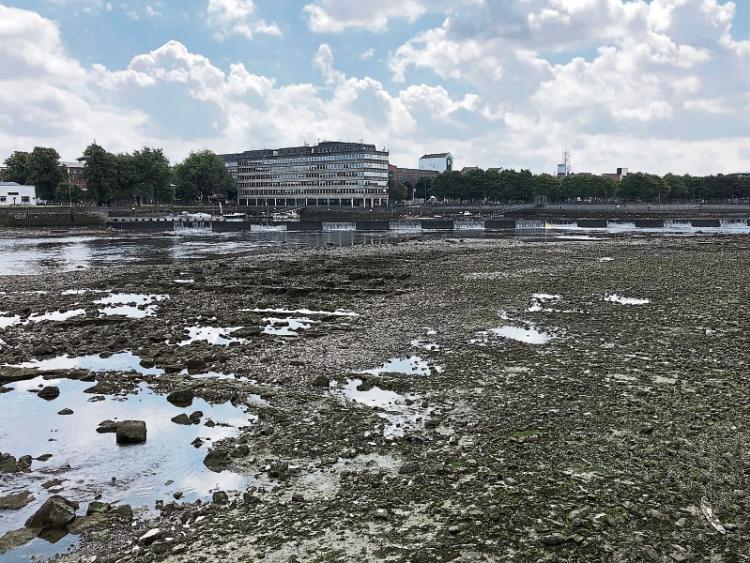 A mere trickle. The River Shannon in Limerick City pictured at low-tide at approximately noon on Wednesday July 11 Picture: Will O’Connor

GROUPS opposing the €1.3bn Parteen Basin proposal have criticised Irish Water after the company stated its plan to extract 330m litres from the Shannon daily would not impact drought in the Limerick region.

As previously reported by the Limerick Leader, the utility said there will be no impact on water supplies during drought as a result of its proposal to extract water from Parteen to supply the Greater Dublin Area.

According to the utility, the 330m litres it plans to extract daily equals 2% of the average flow, which equates to a maximum of 4 cubic meters per second.

Extreme low water on the R. Shannon at Limerick today. Flows are only 11 cumecs over the last 2 weeks ago as drought continues. All generation at Ardnacrusha hydroelectric station stopped - there is no water left. Proposal to abstract 4 cumecs to supply Dublin is not feasible. pic.twitter.com/T88CCROv6d

However, those opposing the scheme estimate that flow by the Old River Shannon area could currently be as low as 10 cubic meters per second.

During the driest heatwave in living memory, the river has been reduced to a “mere trickle”, according to Gerry Siney of the River Shannon Protection Alliance.

“If you extract 330m litres of water, given the conditions, there would not be a single drop of water that will come through. There is barely 10 cubic metres going down the Old River Shannon at the moment; that is barely sufficient to support migratory fish. Decrease that by just a fraction and you won’t have migratory fish going up the river. You take water out of any part of the Shannon, you will affect all of it.”

Will O’Connor of the Old River Shannon Trust estimates that Lower River Shannon discharge has been at 11 cubic meters per second for more than one week, with no generation from the Ardnacrusha hydroelectric station. At low-tide, the amount of water that is actually draining down is visible, he said.

“Its been like this, as low as this for the last eight days now,” Mr O’Connor said.

There is evidence the Shannon went as low as 4 cubic metres per second in the 1920s, he added.

“We’ve an extreme drought at the moment, what is going to happen if it doesn’t rain for another two or three months?”

An Irish Water spokesperson said the plan will maintain the statutory minimum rate of compensation flow, 10 cubic meters per second, to the Lower River Shannon “as a priority”.

“The assessment of water demand already includes for seasonal peaking, such as periods of drought and there will be no increase during seasonal conditions.”