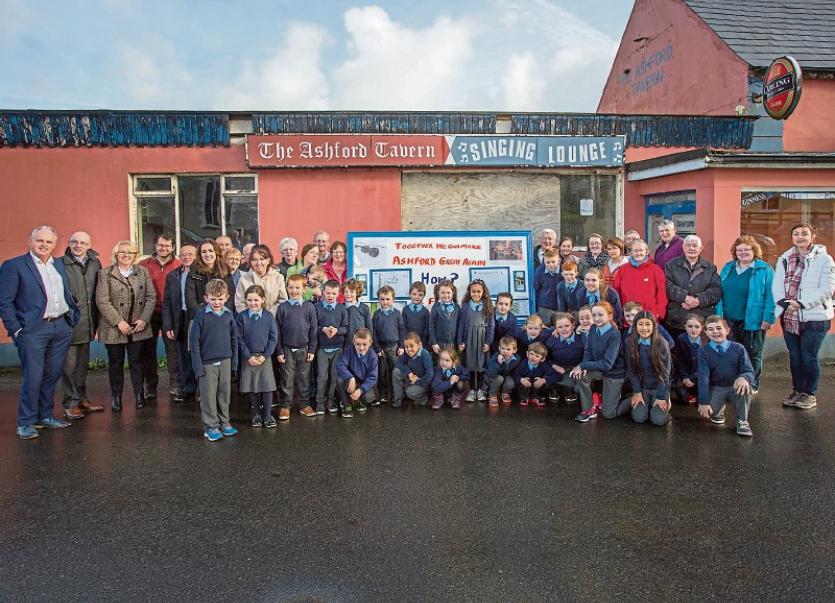 The Ashford Community Resource Centre committee and local school children were pictured outside the old Ashford Tavern, which will be developed into a community resource centre

PLANS to transform a disused pub into a community centre in Ashford have taken a big step forward this week, with plans lodged for the project.

The Kantoher Development Group has formally applied for planning permission to change the out of use pub into a thriving community hub.

The proposals provide for the demolition of existing single storey structures to the rear, side and front of the existing Ashford Tavern, on the village’s main street, and the construction of an extension to the side and rear of the venue, once a popular spot for bands, drawing people in from miles around.

Fianna Fail’s newly elected Deputy Mayor, Cllr Michael Collins, who was born in the Kileedy parish, has welcomed the news, saying the group is “ploughing ahead” with its plans to transform the pub which closed around 15 years ago.

The community resource centre will house a Teach Cheoil, a gym, a youth space cafe, an exhibition and gallery area, as well as a hub for the walkers and cyclists increasingly coming to Ashford and Broadford.

This increase is thanks in part to the Broadford/Ashford walking trails, which has developed a series of scenic walks between the two areas.

Cllr Collins, whose Comhaltas group will use the centre, said: “Even if there is something like a local funeral, or a local Mass, people will be able to use the facility once its reopened.”

It’s also hoped the Ashford Tavern will house an interpretative and information centre, telling the story of St Ita who gave her name to the parish.

Cllr Collins, a former pupil of master traditional player and teacher Con Herbert, one of those behind the project, added: “This shows intent that the local community is set on bringing the project to fruition. Funding is going to be a challenge. But it won’t be horrendous. Once we get planning, we will be in good shape for the next round of funding.”

Speaking of the former Ashford Tavern, he added: “It was a very vibrant bar and singing lounge at one stage. People came from all over Limerick, Kerry and Cork to see the large bands. But then it was sold and the bar went into decline. It became an eyesore.”

The Kantoher development group made a bid for €150,000 funding from West Limerick Resources, but it was rejected.

However, it’s felt that with planning in place, it may be easier to get funding at the next round.

In the meantime, the community has given the old Ashford Tavern a new lick of paint.

Planners at Limerick City and County Council will decide on the proposals by August 15 next.