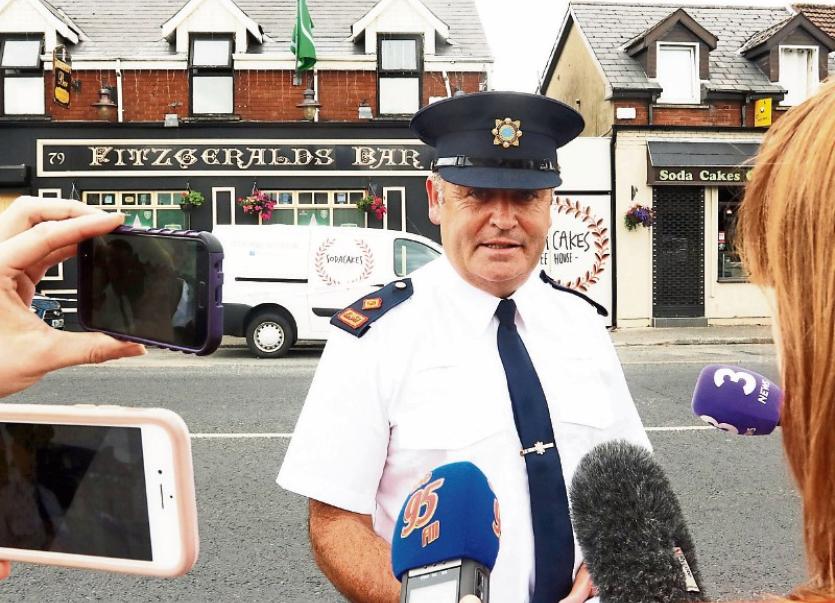 Supt Derek Smart addresses the media outside the location of the incident, Fitzgeralds Bar in Thomondgate PICTURE: BRENDAN GLEESON

LIMERICK Gardai have issued an appeal for information and witnesses following the fatal stabbing of a 24-year-old man in the city last night.

At a media briefing this Sunday afternoon, Supt Derek Smart confirmed that Patrick O’Connor, of Thomondgate was the victim of the incident, which took place in Fitzgerald’s Pub shortly before midnight.

He was moved to University Hospital Limerick, but pronounced dead just before 1am.

Supt Smart confirmed that Deputy State Pathologist Dr Margaret Bolster will attend the scene of the crime, which remains sealed off, this Monday.

A post-mortem will be carried out at 3pm.

The Superintendent confirmed an incident room has been set up at Mayorstone Garda station, and a family liaison officer has been appointed to the family of Mr O’Connor.

Officers are also carrying out house-to-house enquiries and harvesting closed circuit television in relation to the incident.

“I am satisfied it is a critical situation in the sense that Mr O'Connor died inside of the public house, not of his own hands. We are investigating the full circumstances behind that,” he told reporters.

Supt Smart also appealed to people to allow the deceased party’s family the space to grieve.

Local TD Maurice Quinlivan, who lives in the area, said: “It's a great community. We have problems, we have an issue with anti-social behaviour. It's quietened down recently, but this has come as a bolt out of the blue and caused huge stress and concern for people in the local area.”

If anyone has any information in relation to the incident, they are asked to telephone Mayorstone Garda Station at 061-456980, or the Garda confidential line at 1800-666111.