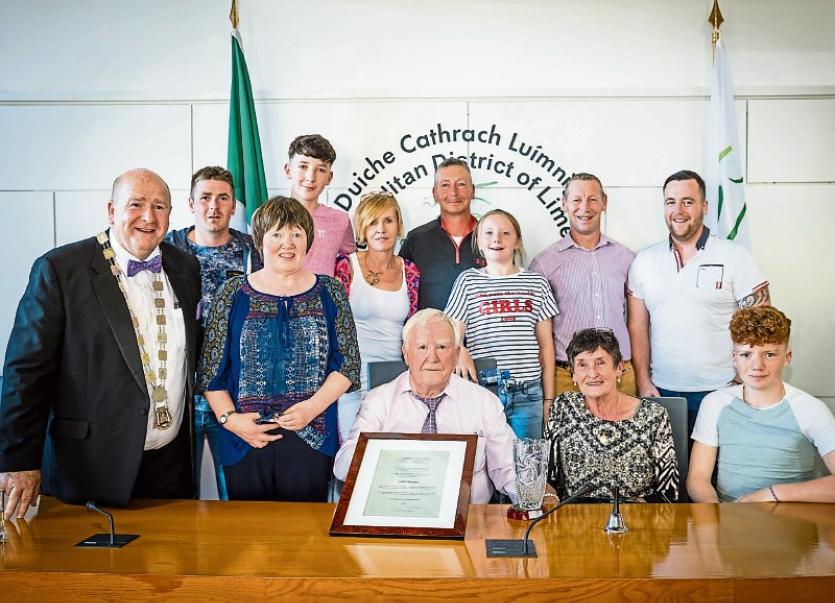 The for Patrickswell's Phil Bennis was hosted by Cllr Seán Lynch, the former mayor of the metropolitan district of Limerick Picture: Keith Wiseman

ONE of Limerick’s most famous hurlers, Phil Bennis, has helped create a new piece of local history, becoming the first Patrickswell man to get a mayoral reception.

Phil, who was a key member of Limerick’s All-Ireland winning panel of 1973, was given the accolade by Cllr Sean Lynch.

And the village was out in force at City Hall on Friday last to honour a man, who also had two spells as the manager of the Treatymen in the late 1980s and early 1990s.

“Phil was part of an elite company of great players, as well as great managers,” Cllr Lynch, who ended his mayoral term on Monday, said.

“He brought a real air of respectability back to the game. He infused his team with purpose and real belief. A touch of steel as a player, who could be ruthless​ in management at times, making big calls for the better of the team,” Cllr Lynch added.

Former council executive Paul Foley represented the Munster council at the reception, said Mr Bennis was directly involved in winning 17 county titles for Patrickswell, either as player or manager.

“He was an influencer, a man who gave guidance. From winning his first championship as an underage player in 1954 which created a launching pad for Patrickswell GAA, Phil has held iconic presence with the game throughout Limerick and throughout the country,” he said.

There were a galaxy of former Limerick GAA stars present at the event, including Ciaran Carey, and Ger Hegarty, plus Phil’s brother Richie Bennis, the last man to take Limerick to an All-Ireland final back in 2007.

Current hurling star Cian Lynch sent his apologies, with the mayor relaying a message that the young corner-forward would have loved to have been present.

He had special praise for “the rock” of his life Mary, saying without her, he would have not been able to do what he has done in his life.

Niall Collins, who also hails from Patrickswell, also revealed it was Mr Bennis who nominated him to stand for Dail Eireann 11 years ago.