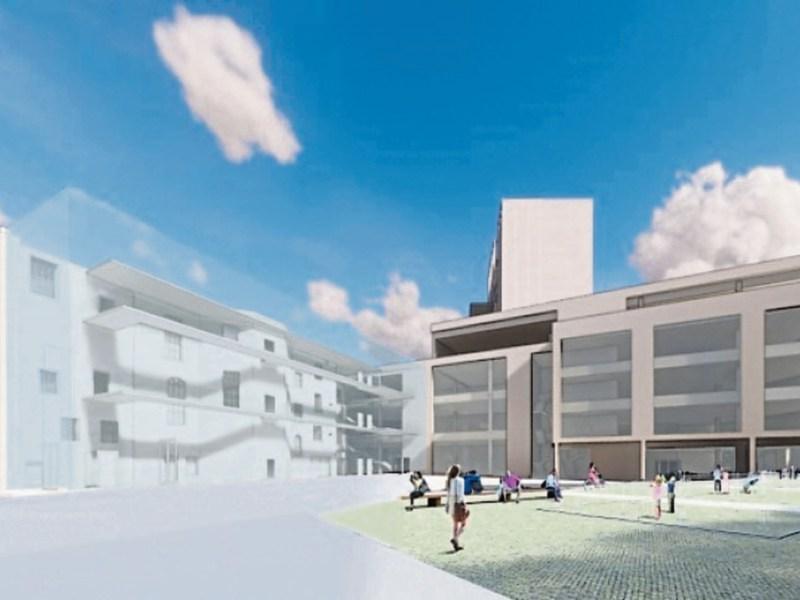 An architect’s impression of the fresh plans for Project Opera, which were unveiled this week

A FINAL application for the €180m Project Opera scheme in Limerick could be made to An Bord Pleanala by Christmas.

This week, Limerick Twenty Thirty unveiled fresh plans for the scheme, which will transform the Patrick Street area of the city, and potentially create up to 3,000 jobs.

The development is divided into six ‘parcels’, with a world-class municipal library at its heart, the Limerick Leader exclusively revealed a fortnight ago.

Parcel one will be a mixed-use retail unit, with office space, while parcel two will see the conversion of Georgian buildings with retail at ground level, upper floor residential, and, in a new departure for Project Opera, an ‘apart-hotel’.

The third parcel will contain the 4,000 square metre library, described as being Ireland’s “most cutting edge”. Parcel 4A will also comprise an expansion to the library and further office space.

Parcel Five will contain the largest structure in the development, the 13-storey office reserved for Revenue, and ready to house 1,000 office workers. Parcel six will bring the conversion of the existing Granary building to restaurant and office space.

It will see the revitalisation of the former Spirit Store pub.​

Fianna Fail councillor James Collins, a Limerick Twenty Thirty board member, said a decision had been made to reduce the size of the other new-builds in the development outside the Revenue complex, to a maximum of five storeys.

“We felt it would be overshadowing the squares in the middle. We wanted the light to be let in,” he explained.

As revealed by the Leader, there will be two courtyard squares in the heart of the development, with five access points into the site off Limerick’s main streets.

The library, which will be located in the Old Town Hall, is being described as being a “living room” of the city, a facility which will embrace traditional library functionality, but also the digital era, with digital story-telling walls and multi-sensory experiences.

It will run across a mix of a three-storey new-build merging into a three to four storey existing structure in Rutland Street, facing out onto the Francis Street junction, creating a new aesthetic for the city centre.

“The feedback we were getting was to have more cultural uses, so we are delighted with the design of the library,” Cllr Collins said, “There will be more night-time use of the site in terms of residential and bars.”

The planned ‘apart-hotel’, which could have up to 90 rooms is set to spark debate, with Cllr Cian Prendiville, Solidarity, saying he would have preferred residential, with just 20 apartments for permanent habitation planned.

However, Cllr Collins believes the development would free up rental space elsewhere in the city.

“We spoke to people who come to town on business maybe working in some of the major employers or even Troy Studios. What tends to happen is the major employers block-book accommodation and make it available for people who come to work for two or three months. But people prefer to have a space where they can base themselves, without packing an unpacking,” he explained.

Cllr Prendiville said he would have liked to have seen the inclusion of more housing- and urged the public to use the upcoming public consultation to reflect these views.

“But I welcome the inclusion of a new library. I think it’s welcome and long overdue. The inclusion of more restaurants is welcome. We’re trying to bring more life to the plaza and square and make sure it’s busy in the evenings and the day,” he said.

There will now be another public consultation period, which will bring about a detailed Environmental Impact Assessment report, and a Natural Impact Statement.

An Bord Pleanala will then be asked to decide on the transformational project.

It’s anticipated the application will be made to the national planning authority by Christmas.