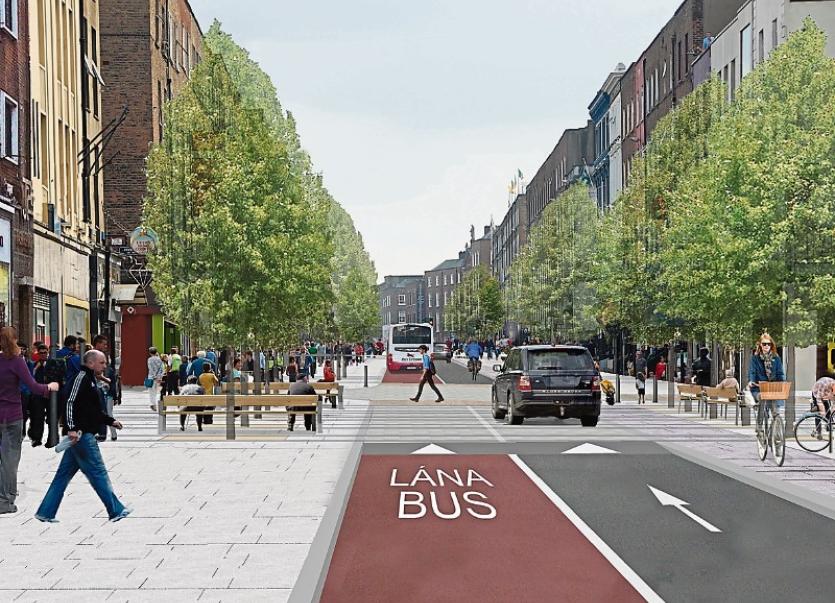 An architecht's rendering of the O'Connell Street redesign

LIMERICK council members could end up objecting to the authority’s own plans for the rejuvenation of O’Connell Street, it has been warned.

Sinn Fein councillor Séighin Ó Ceallaigh has seen a motion passed at this month’s metropolitan district meeting seeking a workshop for members on the €9m project.

He also called for the views of local representatives to be “respected and adhered to”.

Cllr Ó Ceallaigh is concerned at the plans, as he sees them, not changing.

And he adds that if this is the case, himself and other members will object when the proposals go before An Bord Pleanala.

“We are looking to make this a future-proofed plan, one that isn’t redundant by the time it’s built. Unfortunately, the unelected staff won’t listen to the people of Limerick. We will have to make submissions to An Bord Pleanala and hope they themselves make direct revisions to this plan,” the City East councillor said.

Since being unveiled last summer, the plans for the O’Connell Street rejuvenation have received only a lukewarm welcome, with many bemoaning the fact that the initial proposals will not see a complete vehicle ban from the complete thoroughfare.

“Unless changes are made, it will be going to An Bord Pleanala without the support of all the local councillors. Indeed, myself and others will make submissions objecting to the waste of millions upon millions of local tax payers’ money,” he added.

William Street businesswoman Cllr Elenora Hogan has warned that if the plan is not got right, we could witness a repeat of the traffic problems which have beset her street.

“We simply don’t have room to get it wrong,” she said.

Her concerns were reflected by Cllr Daniel Butler, Fine Gael.