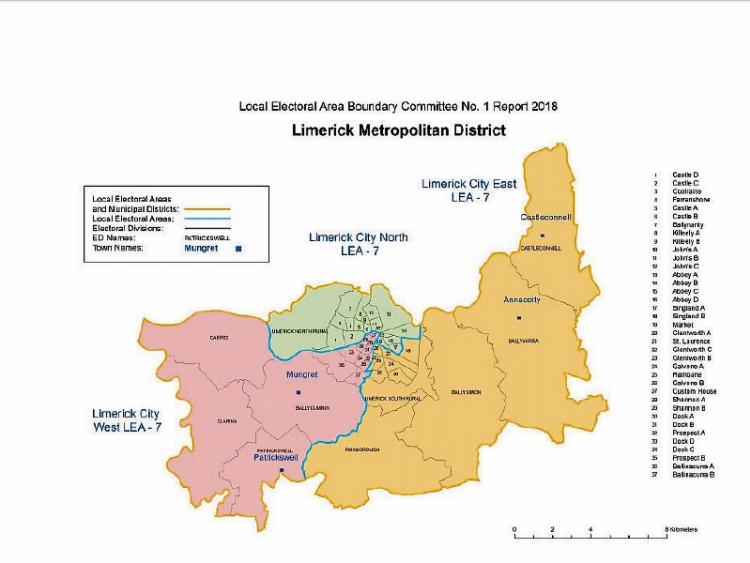 FIANNA Fail councillor Jerry O’Dea has admitted he is “naturally disappointed” to lose a big chunk of his power-base in the boundary shake-up.

As revealed by the Limerick Leader, the metropolitan district will now be comprised of three seven seater constituencies across City North, City West and City East.

The major changes in the boundary commission report – released late on Wednesday night – will see the City East area – stretching from the centre out to Castleconnell reduce from an eight-seater to a seven-seater.

Areas like Garryowen, Pennywell and Mulgrave Street will transfer to the City North ward, which will increase from six seats to seven, with City West retaining the same boundary and representation.

The changes represent a blow to former metropolitan mayor, Cllr O’Dea, who claimed a lot of his 2014 vote from areas now moving to the northside to join St Mary’s Park, Caherdavin, Moyross, Kileely and Thomondgate.

“It is what it is,” said Cllr O’Dea, who confirmed he will seek re-election in City East, “It certainly wasn’t my decision. But there are other parts of the constituency which I represent and I believe I will continue to represent well, going up the Childers Road, over to Janesboro, Roxboro and up to Southill and rural South Limerick, which doesn’t have a member in that area other than myself.”

He acknowledged the City North boundary comes “right up” to the entrance of his pub in Mulgrave Street.

Meanwhile, Solidarity councillor Cian Prendiville is facing into an extended northside ward in next May’s election.

He has welcomed the addition of Garryowen to the northside, however, saying: “It would be a strong area for us. There would be a lot of support for Solidarity there, so that would be a real boost in the north ward too.”

He also welcomed the fact that the constituencies remained fairly large and widespread, saying he would not have liked smaller constituency areas.

Senator Maria Byrne added: “I’m just pleased the size of the city has been maintained. I think it is more balanced now.”

The constituency of Cappamore-Kilmallock will remain a seven-seater, while the areas of Newcastle West and Adare-Rathkeale will return six members apiece.

The boundary commission reports that the individual average population per member in Limerick is 4,872.

The recommendations, which are likely to be adopted are based on the 2016 Census numbers.

The local election will likely take place on Friday, May 24, 2019, the same day as the European parliament.