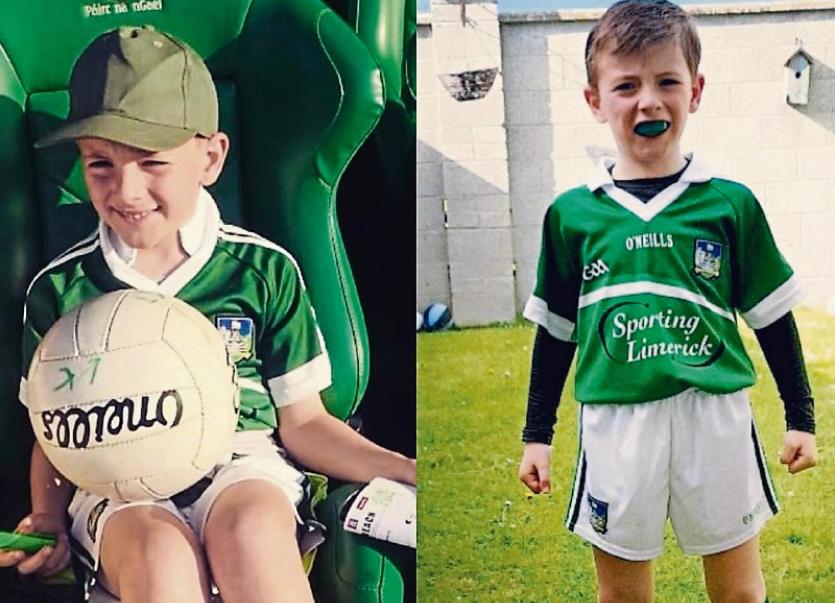 Left, Fionn Clancy, Kildimo in the manager's chair at the Gaelic Grounds and holding the treasured match ball from last Saturday's match against Mayo. Right, in his county colours

MAGIC is made on the GAA pitch, even on days when Limerick loses.

Last Saturday, Limerick’s footballers lost heavily to Mayo, 5-19 to 3-7 but despite that,  it turned out to be a red letter day for Fionn Clancy and his dad John from Kildimo.

“He brought the ball to bed that night,” dad John said this week.

And he brought it to school on Monday. Now, it has its own special bag in the Clancy household.

But John too brought treasure home, the memory of a golden moment at the Gaelic Grounds with his oldest son.

“It was very special,” he said and he is hugely grateful to Peter Nash for making it so.

John and Fionn had gone to the Gaelic Grounds especially to show support for Limerick’s footballers.

“We go to matches every week, whether football or soccer,” John explained. “But we said the hurlers are fine. There will be a huge crowd for them,” John recalled.

The football match itself wasn’t “much of a contest” he added. “Limerick was struggling.”

But afterwards, the father and son went out on to the pitch, filled mainly with Mayo supporters. There they were spotted by one of the Limerick backroom team who handed over one of the match footballs saying, “We won’t miss one.”

“We walked around and saw Josh Ryan, who is Limerick’s best or second best player. Fionn ran over to him and he (Josh) was all smiles and high-fived him. We got his autograph and then we spotted Peter Nash.”

“He couldn’t have been nicer. Fionn plays with the under-8s in Kildimo, the same club as Peter and Peter knelt down, shook his hand, thanked us for coming and they talked for nearly five minutes. Peter promised to keep plugging away with Limerick until Fionn was on the pitch beside him.”

”It meant so much to Fionn. He was ready to burst, he was so happy. He was beaming. He said it was his greatest ever experience at a match.”

John was especially admiring because Peter and the team had just taken a heavy  beating.

“It really was a special moment,” he said and he was inspired to write to Off the Ball where the story was recounted to the nation and put out on social media.

“He made my day as much as I made his,” Peter Nash said when asked about the encounter by the Limerick Leader.

“He is a genuine, nice young fellow and he was buzzing when he came over to me. It would put a smile back on your face. ”

He recognised Fionn from his day job as Hurling Development Officer, he explained.

“On the job, you get used to talking to kids. I was just asking him what did he think of Mayo, how training was going and how were his skills coming along.”

He autographed the ball for Fionn.

Peter was disappointed at the result, he admitted.

“When you run out and put your heart and soul into a game, no matter who you are playing you go out with aspirations. “

But he added: “The memories of that game I will always have. I am lucky to have the opportunity to play.”

Aah. The magic of it all.