Jubilee Mass: Half century of County Limerick church to be celebrated 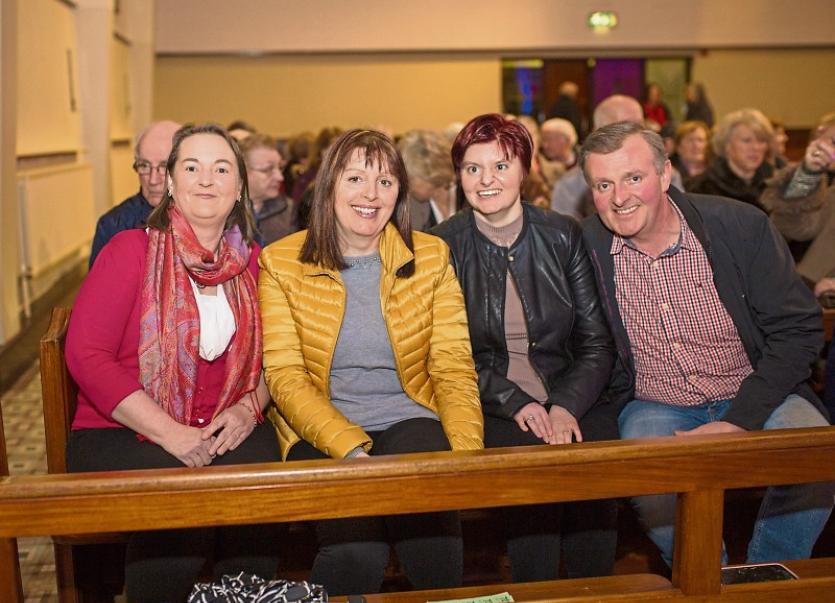 Margaret Curtin with Jackie, Anna and Mikey Cotter at the Jubilee Celebrations for the Church of the Assumption, Abbeyfeale

On that evening, the Bishop of Limerick, Brendan Leahy will join with other clergy and with the community in a special Jubilee Mass to mark the opening of the ‘new church” fifty years ago.

But, stressed Fr Tony Mullins, the celebration is more about people rather than about the building itself.

“The building is important because it is the centre but we are celebrating the people of the parish and their faith.” he explained.

“Despite all the changes over the past 50 years, this is still very much a traditional faith community here and the Mass will be a reflection of that community.”

The much-lauded church choir has been rehearsing seriously for the Mass and young people as well as children from the parish will be also be involved in the ceremony.

“We want it to be a simple, heartfelt ceremony,” Fr Mullins said.

Afterwards, a marquee in the church grounds will host a kind of thanksgiving party.

“It is saying thank you to people for their support,” Fr Mullins said.

There will also be a small exhibition in place, with memorabilia, stories and photos from the years leading up to the completion and consecration of the new church in 1968.

“At that time, it was considered a very modern church,” Fr Mullins said.

The design of the church, he explained, was in line with post-Vatican thinking and it cost £110,000 at the time.

The old church of St Mary’s on Church St, on the site of the Famine Church,  was later demolished.

The jubilee celebrations have run like a thread through the past year.

Through a huge concert featuring Finbar Wright which attracted over 700 people last February, through Holy Communion and Confirmation ceremonies and also through last weekend’s parish walk to the Holy Well at Killeenagh, Dromtrasna. The pilgrims walked across farmland to the well and afterwards enjoyed a barbecue in Cotter’s farmyard.

The past five decades are also the theme of a booklet that has been written by a small group of parishioners called Moladh go Deo le Dia and which will be launched this weekend.