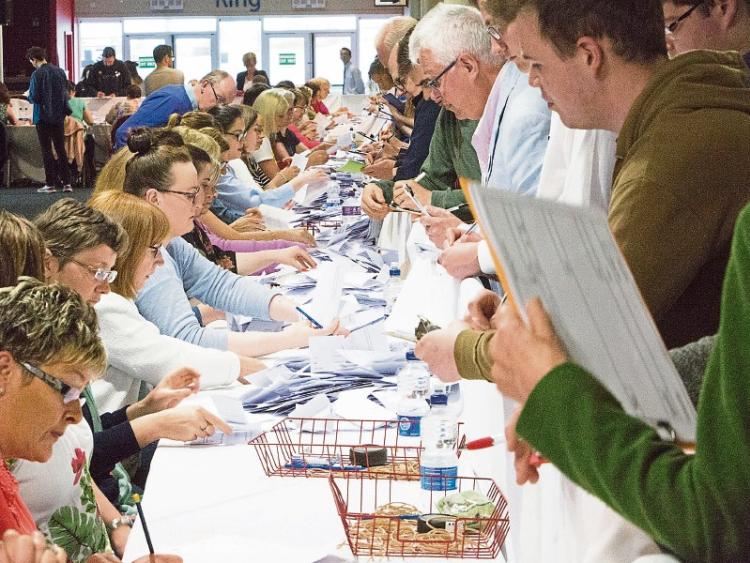 TALLIES taken at the Referendum count at the Limerick Racecourse showed several areas across both city and county where the majority of voters cast their ballots in favour of repeal.

Boxes in Kilfinane and Ballybrown with extremely high Yes majorities (83.1% and 93.9%) were excluded from final Together For Yes tallies by Thomas Bibby due to concerns there may have been a discrepancy while they were being collected.

Boxes with the largest Yes majorities were recorded in the Castletroy and Monaleen area in the Limerick City electoral district.

One ballot box in Gaelscoil Chaladh An Treo in Castletroy reached a 77.8% Yes majority.

A high Yes majority was also recorded in Croom, with one box tallied at 64.2%.

Boxes tallied at the count find 12 ‘No’ majority polling stations

Twelve areas across Limerick recorded a No majority, tallies taken at the Limerick Count show.

A total of 248 boxes were tallied at the count.

Talliers recorded a relatively high No majority for the polling station in Glengort where 59.4% of voters cast their ballot in favour of retaining the eighth amendment.

A majority was also recorded at the first Foynes polling station with 59.3% of people voting No.

One box in Rathkeale recorded a No majority of 55.9%. This was the only box that was tallied from the area at the count.

In Ballygiltenan NS polling station 53.3% of people voted No.

In some cases, boxes edged ahead with a slight No majority with just a couple of votes.

The polling station at Ballykenny Dispensary recorded a slight No majority by just three votes, at 50.8%.

The polling station in Garrydoolis also edged a slight majority No at 52.9%.

The polling station at Caher National School also had a No majority at 52.2%.

- For a full box by box breakdown of the results for Limerick city and county, see the print edition of the Limerick Leader, in shops now