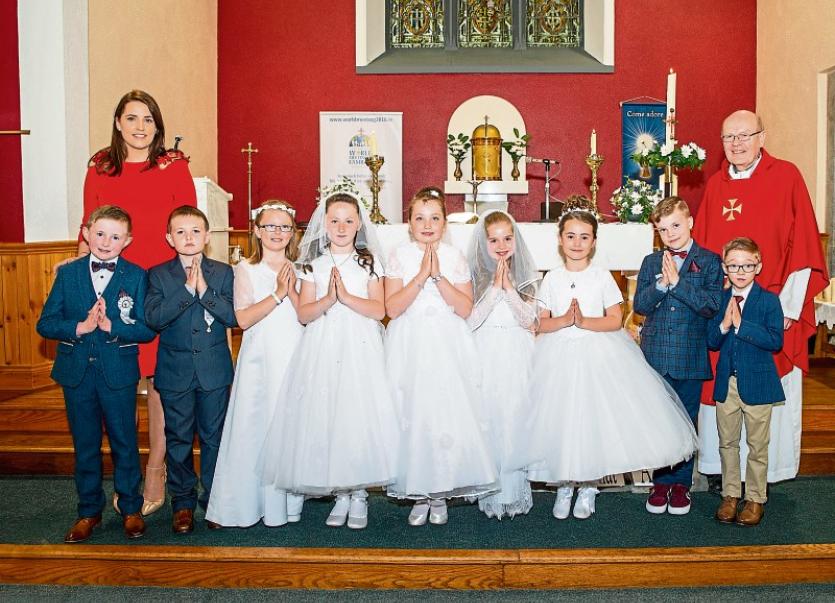 A SMALL West Limerick school is celebrating its biggest ever First Communion class in memory — and it’s only nine children.

Ballysteen NS usually sends three or four children to the church in May, but this year they have prepared nearly 10 second class pupils for the sacrament.

The school population has doubled in size over the last 20 years, and trebled since its lowest point over 15 years ago, when numbers threatened to dip below 12.

Now, there are a comfortable 36 pupils on the roll books.

“It’s the biggest class we’ve had in over 30 years,” said principal Mary Flannery.

The Communion classes are made up of, on average, around three children each year. “Sometimes there would be four or five, and we’ve often had two,” said Mrs Flannery.

One year in the last decade, Ballysteen made an exception and allowed one child in first class to make her communion with the second class, because she was in a class on her own.

“We never hold our Communions on a separate day on its own, it is always held at Sunday Mass in Ballysteen at 9.30am. Because of that, there is huge community engagement and you would have lots of people there who may not come to the separate Communion.

“The Parents’ Association always hold a celebration and refreshments in the school after Mass, and it is a great social occasion for the whole area, because there is no pub or shop in Ballysteen. Everyone comes to the school, whether or not they have a child in Communion class, and they stay for a chat and see their neighbours. There’s a great community spirit,” said the principal.

The growth of several small schools around County Limerick seems to point to a growing trend. Ballyseten, a two-room school, recently celebrated 50 years, and boasts an SNA in each classroom, as well as an on-site special education teacher.

“Ballysteen is a close-knit community with a very active Parents’ Association. We normally see three or four pupils coming in every year. A lot of them come from outside and may not live in Ballysteen, but we find that most of them have some link to Ballysteen, a lot of their parents may have come to school here and they live in neighbouring villages and want to send their kids to their old school.”