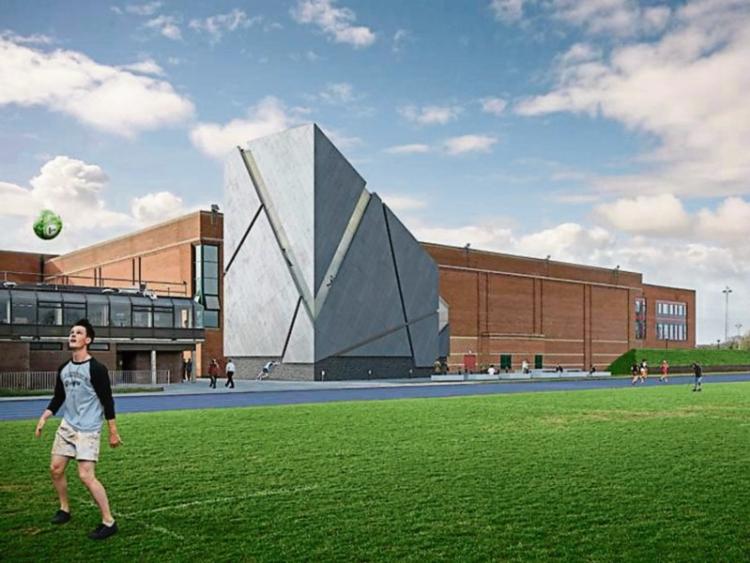 An artists impression of the dedicated climbing wall to be constructed at the University of Limerick. The university has signaled its intention to shortly apply for planning permission

LONG-STANDING plans to build new sports facilities at the University of Limerick Sports Arena moved a step closer this week, as the university signals its intent to apply for planning permission for an ambitious climbing wall project.

A new 228m2 extension at the UL Arena will see a new, dedicated climbing wall being built at the popular sports hall.

Last month, the UL Governing Body signed off on its plans for the building, which is expected to include an element of glass-fronting so that spectators can observe climbers in action.

The apex of the building is expected to reach 21 metres above floor level, according to the university’s application to the planning authority.

Works on the project will include the partial removal of an earth mound around the athletics track, a realignment of service roads, landscaping and ancillary works.

According to the planning notice, UL falls within an architectural conservation area with the proposed site located approximately 400m from Plassey House, and 1,122m from Plassey Mill, both of which are protected structures.

In 2016, students voted to introduce a new staggered levy to go towards the build of a new student centre and sports facilities.

Planning permission for the new UL multi-million euro student centre was granted at the start of May.

Comprising of a three storey, 3,529 square metre building, the student centre is to be constructed in a prime front-of-house location on campus, adjacent to the Stables Complex and the Library.

The dedicated climbing wall at UL Arena will come as good news for the UL Outdoor Pursuits Club, who lost its old facility when the PESS Building at the University was demolished.