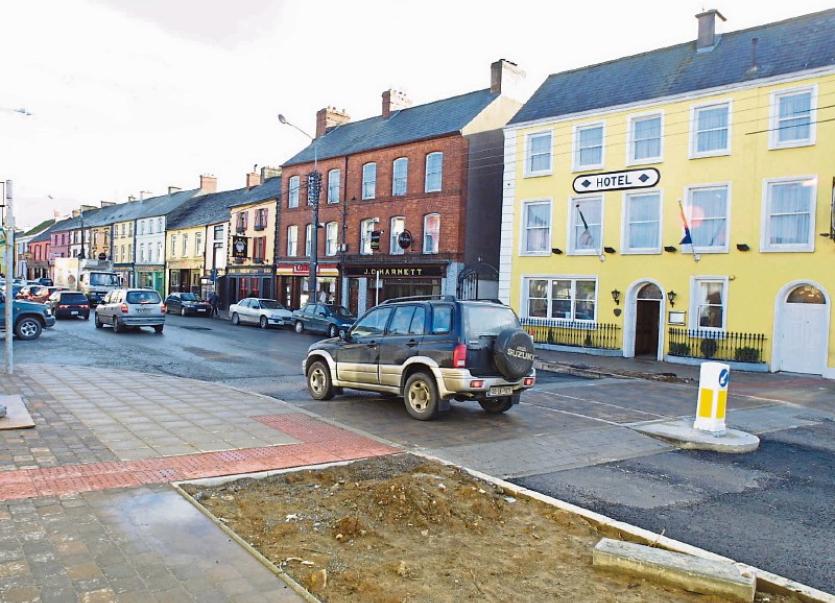 AFTER almost four hours of intense discussion, a modified traffic management plan for Abbeyfeale was agreed this Wednesday and the €3.7m plan as amended will now move on to the next stage in the planning process.

“This is an historic day for our town of Abbeyfeale,” Cllr Liam Galvin said before he introduced the variations to the plan.

“The landscape of the town is going to change in a big way. The proposed plan is going to address a lot of issues in the town since the day of the pony and trap and Fair Day.”

“We have taken a giant leap here today,” declared Cllr Seamus Browne while Cllr Francis Foley said it was “a huge vote of confidence in our town.”

The multi-million euro plan was due to be voted on by the six Newcastle West Municipal District councillors last week but a final decision was deferred after business people in the town had raised concerns about aspects of the plan, in particular, about the removal of car park spaces along Main St.

This Wednesday morning, a group of business people along with other community representatives, met with councillors and officials to try and reach a compromise.

Several hours of discussion took place and the official meeting of the Newcastle West Municipal District had to be postponed three times but finally, shortly before 2pm this Wednesday, there was white smoke and the modified plan was voted through unanimously by the six councillors.

Key features of the plan remain: a building is to be demolished at New Street to allow for better access to Colbert Terrace and a two-way system along it. A building bought by the council near Leens Hotel is to be  demolished to allow pedestrian access to the car park at the rear.

Nineteen car park spaces will go from Main St and the footpaths are to be modified. But Riordan’s Bar on Main St is to be bought and demolished to allow 24 off-street parking spaces and 11 spaces at the rear of McMahon’s Butchers with an extra five to be provided in the Square.

Traffic lights are to be installed at two junctions: Joy’s Corner and the Fire Station.

However, under the terms of the modified plan, no spaces are to be removed from Main St unless and until the off-street parking is provided and a detailed modelling of the traffic lights system is to be carried out. Should the traffic lights not work, it was agreed they would be removed and parking spaces reinstated.

Two set-down areas are to be provided at Batt Hartnett’s to facilitate the medical centre and a pedestrian crossing is to be installed near the library. A loading bay is to be put in place in Colbert St/Terrace along with a new lay-out and design for the street and the roundabout.

It was also agreed the council would actively pursue acquiring additional parking at the rear of the old bank and would actively try to purchase property to allow a new road to link The Hill with the Killarney Rd.

Finally, it was agreed that, at design stage, the middle section of Main St, would be examined again to see if more parking spaces can be maintained there.

Cllr John Sheahan said previous traffic plans for the town had failed but he now called on Transport Infrastructure Ireland to “step up to the mark”  and provide the money to carry out the plan.

Welcoming agreement on the plan, Cllr Seamus Browne said it was a “very important moment for Abbeyfeale” and would help recreate the town as a place that is safe, a place to do business in and a place to stop, eat and drink.

Cllr Francis Foley said it would be a major boost to the town. He pointed out there had been over 160 submissions made to the original plan and as a result, he said, “we have a better plan before us today.”

“When this is complete, I hope our decision today will make a major impact on the businesses of Abbeyfeale,” Cllr Foley added.

Cllr Jerome Scanlan said it would make the town a safer place.

“If we don’t support business and try to create on street parking, people won’t be travelling to Abbeyfeale,” chairman of the Municipal District Michael Collins said.

But he concluded, democracy at its had been seen to work.