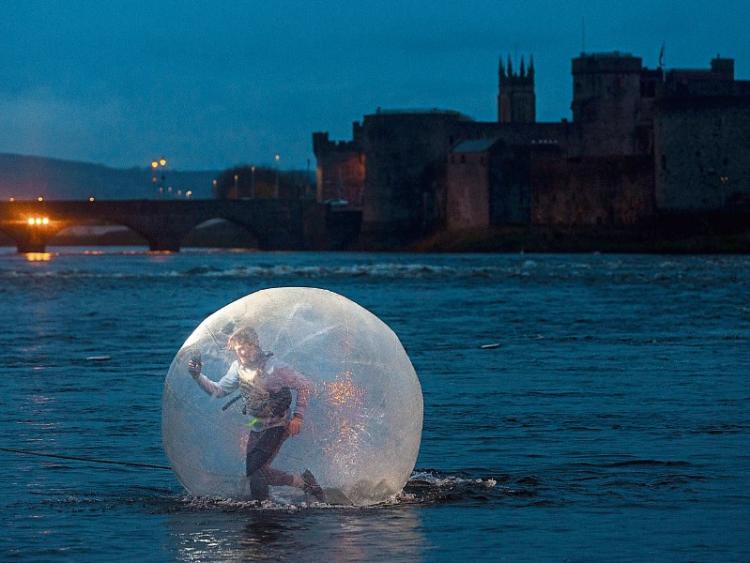 Carlos Orcher from Nevsail Watersports tests out the Zorbs on the Shannon ahead of Riverfest Picture: True Media

AN estimated 85,000 people are due in Limerick this weekend as the city’s biggest celebration of year takes place.

Riverfest 2018 will set sail on Shannonside from Friday, with this year’s line-up bursting with big name acts and unmissable events.

Met Eireann has cautiously predicted Limerick will bask in sunshine and warm temperatures for the 14th edition of the annual festival.

At the centre of this will be the return of the Riverfestival village at Arthur’s Quay Park, something which is being described as “a weekend long cacophony of foods, crafts, vintage amusements, street performers and live musical entertainment.”

The Riverfest BBQ returns to the boardwalk, ​while tens of thousands people will take part in Sunday’s bon Secours Hospital Great Limerick Run, which is now in its ninth year.

The naval ship, Le Eithne is to visit Limerick Port for the event, and will offer tourists the chance to have a look around.

The Irish naval ship the LE Eithne is coming to #RiverfestLimerick 2018!

It is open for FREE family tours on Saturday and Sunday between 2pm-6pm at its base at Limerick Docks ⚓ https://t.co/v62RUpO3qF pic.twitter.com/UDn3JZR1En

Meanwhile other water-based activities include the return of the Zip Line – but this time twice the fun with a double line! There will also be water zorbing, kayaking, and a social swim. Although those entering the river will need to be careful of a new 18-foot ‘shark craft’ vessel, which can travel at up to 80km per hour.

A new ‘food experience’ will take place in the garden of the Hunt Museum on Friday and Saturday.

Mayor Stephen Keary said: “Limerick is a city very much on the up and Riverfest is a reflection of this. It has grown and grown as a festival over the years to become not alone the biggest gathering in Ireland of the May Day weekend by far, but also one of the biggest Irish summer festivals. Limerick is the largest urban centre on Ireland’s largest river, so it’s only right we should turn to it for a celebration like this.”

Although the main events take place on Saturday and Sunday, the festival gets going on Friday, with a fashion showcase in Arthur’s Quay.

This will be across three races: a full 26-mile marathon, a half-marathon of 13 miles and a six mile ‘fun run’.

Saturday will also see another race sponsor, Holmes O’Malley Sexton’s fittest company challenge in the University of Limerick arena on Saturday, where the Children’s Fun Run will take place.

The majority of the Riverfest attractions are free.

Laura Ryan, the head of communications at Limerick City and County Council, said: “We’ve had a very long winter, that very much consumed the spring but we’ll be putting all that behind us with Riverfest and the promised good weather! It’s a brilliant mix of different elements and most of all offers something for everyone.”

Sheila Deegan, the council’s arts officer added: “The continued development and investment in Riverfest shows Limerick’s desire to grow our visitor offering. The river has been a place of industry and recreation for many years and holds memories for young and old.”

- To stay in touch with the Riverfest celebrations, keep an eye on www.limerickleader.ie, follow us on Twitter @Limerick_Leader and for pictures from the event see The Leader next Wednesday.