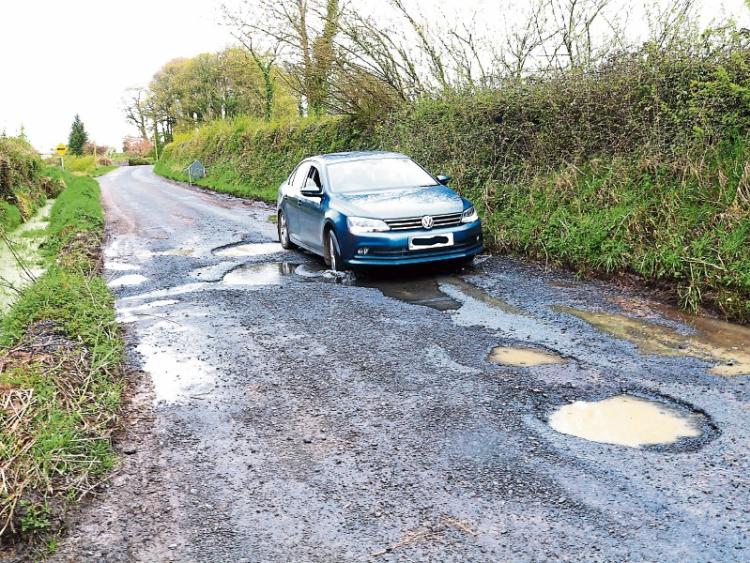 Easy does it: A motorist cautiously approaches the giant pothole near Ballynamona Cross between Hospital and Herbertstown on Monday Picture: Michael Cowhey

MINISTER Michael Ring announced €411,388 has been allocated for the upgrade of small roads in Limerick on Monday – and judging by this photo it is badly needed.

On the same morning, the Leader got a phone call from a man declaring he had found “the biggest pothole in County Limerick”.

It is situated on the road to Kilteely at Ballynamona Cross, located between Hospital and Herbertstown.

“I drove that road to Kilteely on Sunday. I couldn’t get over it. I had to drive very slowly, let the front wheel gently fall in to the pothole, crawl along and then drive out of it. There is no avoiding it. You have to go into it. It is massive.

“I’m grand because I know the road but what about the person who doesn’t or has taken a wrong turn?” said the man who lives in east Limerick.

He said that “if you drove into that at any speed at all you would do fierce damage to your car”.

“If it is full of water at night you wouldn’t know until it is too late. I’ve never seen one as big. There is a fall of easily six inches. To be fair our roads are better than neighbouring counties but that one is a whopper,” he said.

When contacted by the Leader, a spokesperson for Limerick City and County Council said on Wednesday that staff are “on site since early this morning working on it”.

“What happened was there’s an old culvert going from the road to the river that was blocked by a plantation of trees. They’re relaying that line of pipes to the river and that will take away the pothole. The council is doing this in conjunction with the landowner where the issue is,” said the spokesperson.

The Minister for Rural and Community Development revealed that County Limerick was to receive €411,388 as part of the Local Improvement Scheme (LIS). A total of €10m was divided between county councils across the country.

“The LIS is about improving small roads and laneways in rural Ireland which are not under the normal maintenance of the local authorities. This scheme is a lifeline for people living in rural areas because it directly improves their access to and from their homes and farms.

“Many people living and working in rural areas use these roads every time they enter or leave their home or farm, so the condition of their access road really impacts on them. Investing in the improvement of these roads really makes a positive impact on people’s quality of life in rural areas,” said Minister Ring.

Councillors in the Cappamore-Kilmallock municipal district have repeatedly raised the roads situation at their monthly meetings with Cllr Noel Gleeson saying “there will be war” over the state of the county’s rural roads.

If a pothole in your area is bigger please send a photo and the location to news@limerickleader.ie