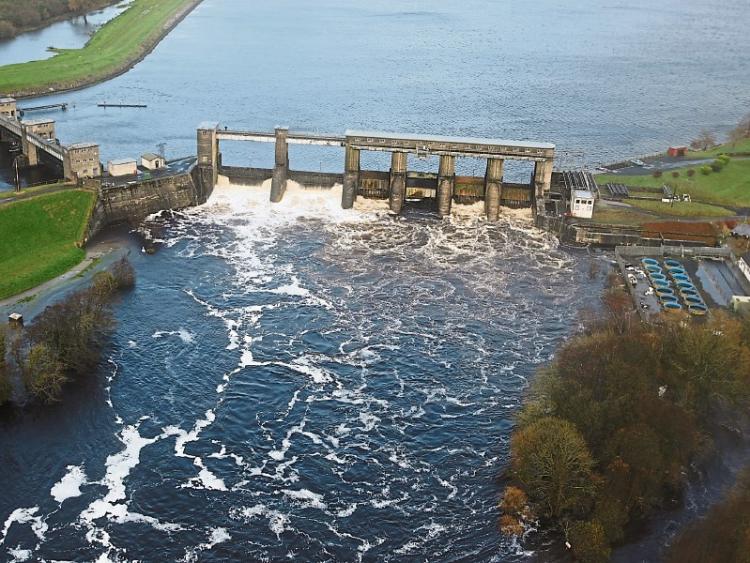 The Headrace canal on the left separated by Parteen Weir near to where Irish Water intends to apply for planning permission Picture: Liam Burke/Press 22

OPPOSITION to Irish Water’s plans to abstract 300 million litres of water daily from the River Shannon vow that they will pursue their fight to stop the scheme through the courts should the project get the go ahead.

Irish Water has confirmed the Shannon Water Extraction Project, a scheme proposing to take 300 million litres of water daily from the River Shannon near Parteen Weir and pump it to Peamount in County Dublin in order to meet the future water needs of the greater Dublin area.

The company plans to submit a planning application to An Bord Pleanála in 2019 and an Environmental Impact Assessment Report and Natural Impact Statement are currently being undertaken by the company.

“We will be there at planning with a very strong submission,” Gerard Siney of the River Shannon Protection Alliance (RSPA) said.

“Definitely, there is no question about that. Then to extend on beyond that, if it gets passed planning we will continue to fight it with appeals and the courts are open to us too.

“We are getting strong support for that.”

According to Irish Water, the Shannon Water Extraction Project is critical to meet the ‘urgent water needs’ of Dublin and the Midlands, and the company has rejected claims that the plan fails to address Dublin’s leakage problem.

However, critics of the plan say the efforts to get the project across the line become more ‘disingenuous’ at every turn.

“Irish Water continues to present a misleading story when it comes to Dublin’s leaks and this report will do nothing to change that,” according to Emma Kennedy, author of the Kennedy Analysis, a highly critical forensic analysis into the project which claims that Irish Water made basic mathematical errors in its calculations for the project.

The company cites a leakage rate of 36%, she added. “But that figure does not include a single drop of customer side leakage which brings Dublin’s total leakage to around 57%.”

“Irish Water in its statement talks about a public consultation; we cannot imagine that those it consulted with were told that over half of the water taken from the River Shannon and expensively treated would be wasted.”

Irish Water says the project will consist of the biggest upgrade to Ireland’s water infrastructure in more than 60 years.