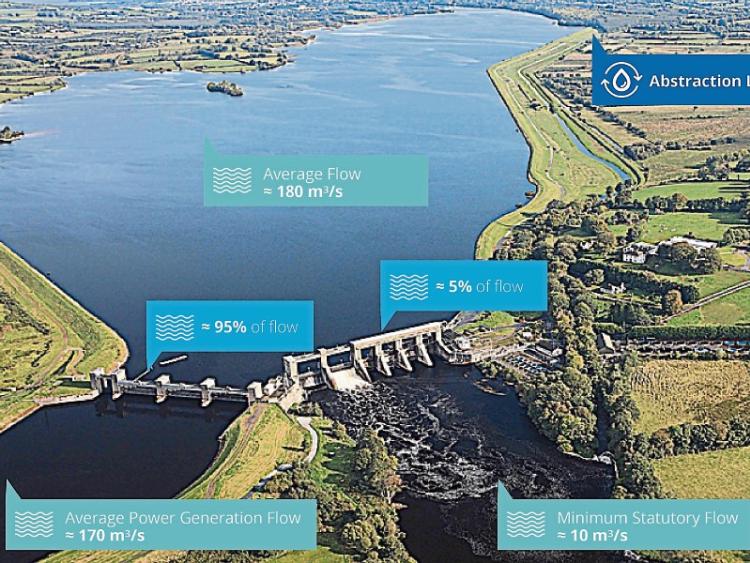 IRISH Water “continues to present a misleading story” to the public, according to the author of a highly critical report into the company’s €1.3bn plan to pump the River Shannon.

The company has confirmed its plans to abstract 300 million litres of water daily from the River Shannon at Parteen Basin and pump it to Peamount in County Dublin in order to meet the future water needs of the Greater Dublin area.

Irish Water is currently preparing an Environmental Impact Assessment Report and Natura Impact Statement and a planning application that will be submitted to An Bord Pleanála in 2019.

Efforts to get the Shannon Water Extraction Project across the line get more disingenuous with every turn, according to Emma Kennedy, author of the Kennedy Analysis, a highly critical forensic analysis into the project which claims that Irish Water made basic mathematical errors in its calculations for the project.

“Irish Water continues to present a misleading story when it comes to Dublin’s leaks and this report will do nothing to change that,” Ms Kennedy said.

“Its press release cites a figure for leakage of 36% but that figure does not include a single drop of customer side leakage which brings Dublin’s total leakage to around 57%.”

“Irish Water in its statement talks about a public consultation; we cannot imagine that those it consulted with were told that over half of the water taken from the River Shannon and expensively treated would be wasted.”

“These are good minded people who if presented with the real facts would not stand for the sheer wastage of this.”

Irish Water has done nothing to change the unreliability of supply to Dublin householders and businesses, she added.

“Because of the state of Dublin’s pipes, they will continue to be condemned to water outages like they experienced during Storm Emma recently,” she said, adding that Irish Water plans to replace just 1% of Dublin’s pipes per annum.

“One percent per annum might be viable for the maintenance of an efficient water supply system, such as those in Paris and Frankfurt where leakage is around 7%, but it is not viable for Dublin.”

“Dublin’s water mains do not need maintenance: they need a major overhaul and this will soon become unavoidable regardless of whether or not the Shannon project proceeds.  Ultimately, why should the taxpayer pay twice?”

Ms Kennedy is due to appear before the Joint Committee on Housing, Planning and Local Government alongside Irish Water in relation the Shannon project this Wednesday, 25 April.

“It is disappointing but not surprising that Irish Water have sought to undermine that opportunity with the publication of a report that has been 18 months in production.”