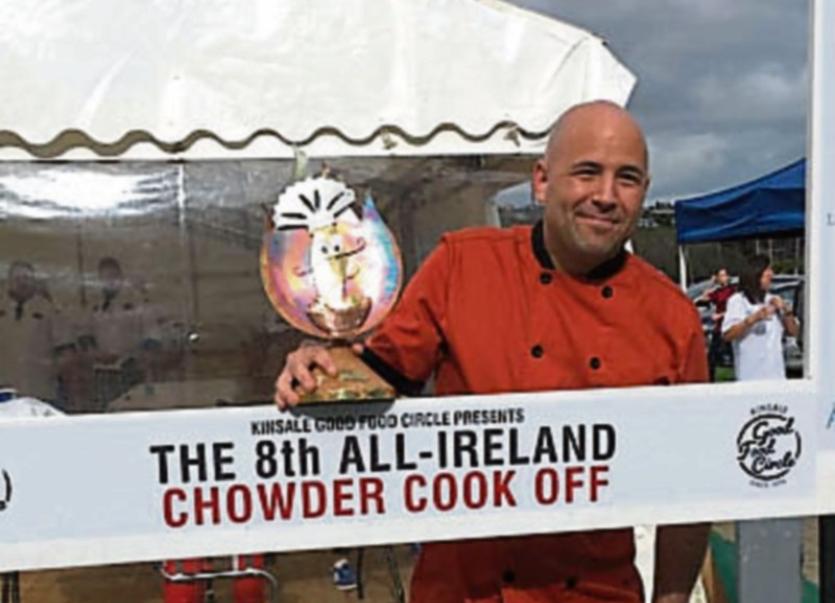 LIMERICK chef Danny Martinez Doyle is Ireland’s Chowder King, following the big, Chowder Cook-Off of the year which took place at the weekend.

Danny is head chef at Cronin’s Bar and Bistro in Newcastle West and beat off competition from 24 other chefs at the cook-off to bring home the All Ireland Chowder Champion title.

“For me It was tense,” he admitted but he stuck to the recipe which won him the Limerick title in March and which includes fish, canelloni beans and a chorizo crust.

“I knew in my soul it was good,” he grinned.

And the huge crowds which attended the cook-off in Kinsale agreed, backing Danny’s chowder with their votes.

“The atmosphere was electric at this truly amazing food event,” said Priscilla Cronin, one of the Cronin family members involved in the business who travelled to Kinsale to support Danny along with members of staff. “The reaction to Danny’s chowder was just incredible as many came back for seconds and thirds and looking for the recipe.”

“We are delighted for him,” she continued. “It’s great and it’s great for business. We are back doing full-time food with a new menu and it’s fantastic this award has come now.”

Demand for Danny’s chowder has soared since he won the Limerick title and is now expected to be an even bigger, and daily, attraction at this family-run business.

Danny was presented with  the Derek Davis Perpetual Trophy, named in memory of the RTE broadcaster who was the event's original compere and who presided over the event in his inimitable style last year, shortly before his untimely passing.