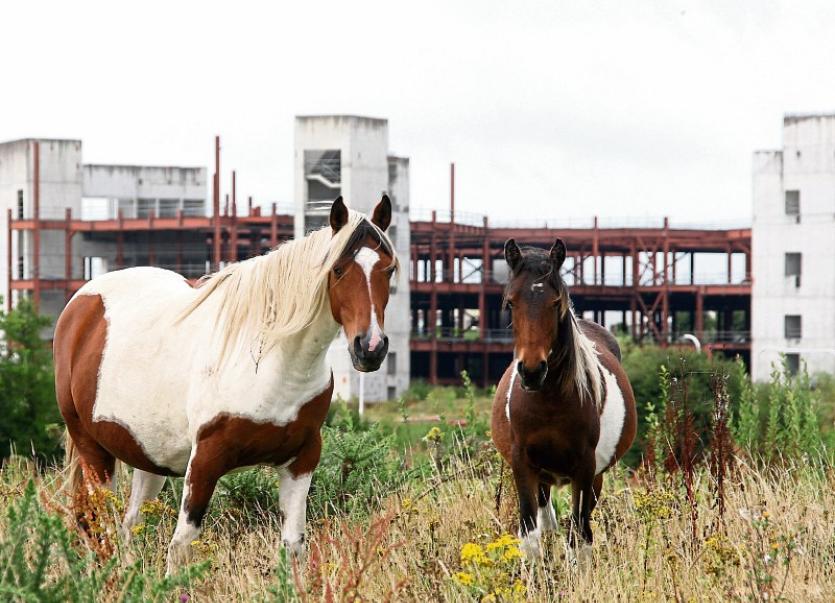 Horse graze near the site of the Horizon Mall

A COUNCILLOR has called for the “camouflaging” of the long-derelict Horizon Mall site at the Dublin Road, disguising it from incoming traffic.

“Until something is done with it. We cannot keep putting up with this unbelievable derelict site on the edge of the city. Let’s put forward a plan for it.

“Can we cover it, can we put up camouflage,” she suggested.

Cllr Hurley also warned children are breaking into the site, with the lift shaft now full of water.

“Can we ask the owners to put security on the site,” she asked.​

Former detective garda, metropolitan mayor Sean Lynch said: “The onus is on us as councillors to do something. If someone was to get injured, this could be on us.”

The debate on the site – which was once destined to be a multiplex cinema and ice rink before the crash came – came up following a question by Solidarity councillor Paul Keller, who lives in the adjacent Castletroy View estate.

He asked if the council is in discussions with the present owners of the Horizon Mall, with regards its future plans and use, and whether the site remains on the derelict site list.

In a w​ritten reply, Gordon Daly, director of service, said discussions are ongoing with the developer.

“A section 11 notice was issued under the Derelict Sites Act in September 2017 requesting the owners to carry out necessary works. If the necessary works are not carried out, the next available option under the Derelict Sites Act 1990 is for Limerick City and County Council to issue a section 8 (2) which states it is our intention to enter the property onto the derelict sites register,” he wrote.

This move is notable, as it would then mean the owners of the site would be liable to much higher rates.

A spokesperson for Capital Assets, which took over the site from Belfast-based developer Suneil Sharma in 2016, told the Limerick Leader last month a new plan is on the way.

But Labour councillor Elena Secas said she is fed up of receiving the same answer from council officials, and demanded a special meeting on the development.​

“People living in the area do not deserve to have to be looking at this site,” she said.

It was agreed a special meeting dealing with the Horizon Mall issue would take place ahead of next month’s full council meeting.