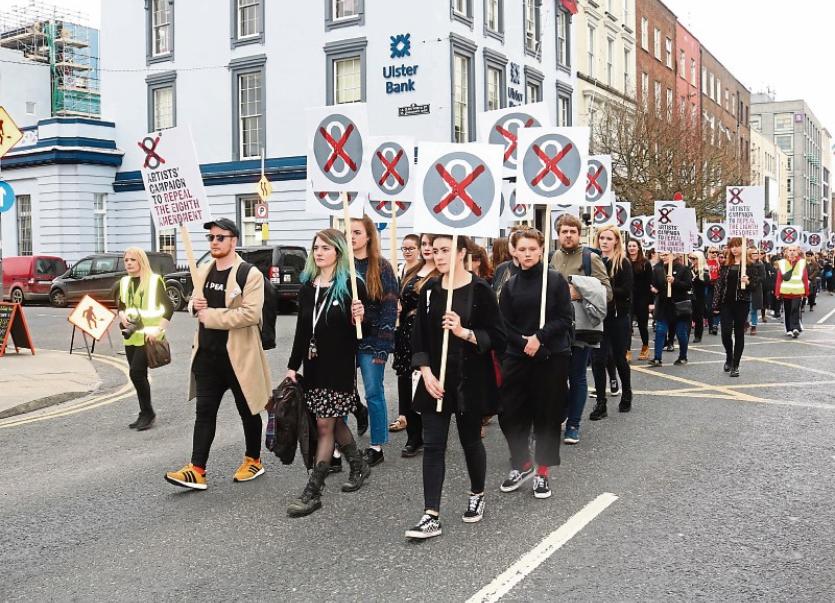 Participants in the Artists for Repeal procession on O’Connell Street in the city during the opening weekend of EVA International | Picture: Michael Cowhey

EVA INTERNATIONAL has defended the inclusion of artwork and performances created by a group of leading Irish artists campaigning for a repeal of the Eighth Amendment.

A complaint was made by a member of the public to the Limerick Leader regarding the inclusion of The Artists’ Campaign to Repeal the Eighth Amendment in the 38th EVA International.

An event receiving public money should not be politicised, the complaint stated.

EVA has now moved to clarify that public funding did not directly contribute to the group’s presentation and that the group was selected as its work is relevant to the exhibition’s themes of “power, gender politics, and nationhood”.

“EVA has a long history of supporting the work of artists and appointed curators, and firmly believes in the positive contribution that art can make to civic society,” an EVA spokesperson said.

“Since 1977, this has often involved supporting artwork that challenges public opinion, in prompting debate and discussion.

“No public funding from the Arts Council or local authority directly contributed to the presentation, which was resourced from other revenue sources.”

The group began as an online campaign appealing to other artists, writers, musicians and actors to add their names to a statement calling for the repeal of the Eighth Amendment of the Irish constitution, which states: “the State acknowledges the right to life of the unborn and, with due regard to the equal right to life of the mother”.

The group’s contribution to the 38th EVA International includes the ‘Repeal! Hub’; an exhibit featuring banners and costumes created by the group, and an interactive art piece where visitors are invited to physically ‘Shred the 8th’.

The group also held a group street performance, called the Artists for Repeal Procession, through Limerick City during the opening weekend of EVA.

Approximately 140 people took part in the performance, including representatives from the Artists Campaign to Repeal the Eighth Amendment; Limerick folk-band the Ukealadies, the contemporary dance group Cut Out Dolls and members of the public. The procession made its way from the Limerick School of Art and Design through the city centre, via O’Connell Street, to Cleeve’s Factory.

“EVA supports the participation of The Artists Campaign to Repeal the Eighth Amendment, as part of the 38th edition of EVA International, Ireland’s Biennial of Contemporary Art curated by Inti Guerrero,” the spokesperson said.

“The participation of the artists campaign group, featuring artists Rachel Fallon, Sarah Cullen, Alice Maher, Alison Laredo, Aine Phillips, Breda Mayock, was selected by Inti Guerrero through an Open Call process, on the basis of a proposal that was relevant to the curatorial themes of power, gender politics, and nationhood.”