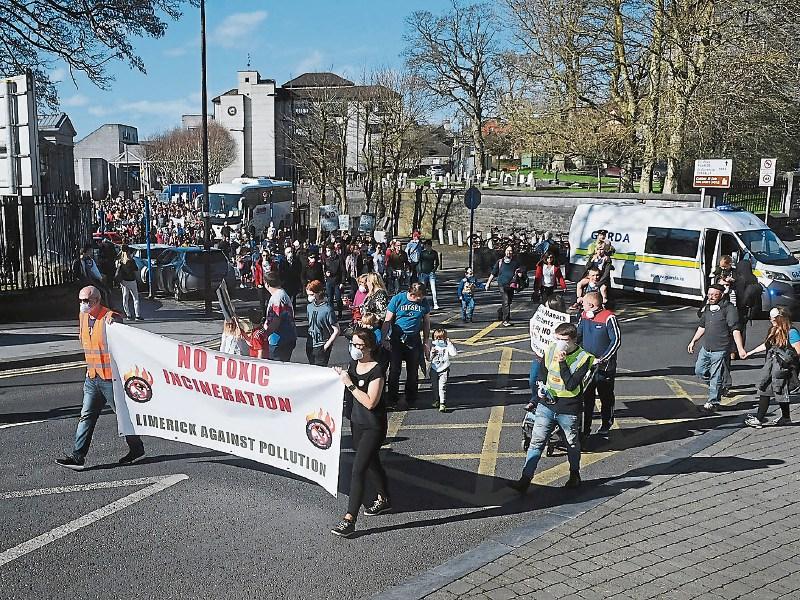 OPPONENTS of Irish Cement’s €10m plan to change process in Mungret have said their fight against the project is “far from over”.

It comes in spite of An Bord Pleanala this Friday granting permission for the €10m proposals, which will see the use of fossil fuels phased out in favour of used tyres and solid recovered waste.

Limerick City and County Council first granted permission for the controversial development in March 2017 despite a number of public protests.

The local authority’s decision was appealed to An Bord Pleanala by a number of local residents as well as Limerick Against Pollution, a move which led to an oral hearing in the South Court Hotel.

Residents are fearful of an increase in emissions into the local environment, but Irish Cement has always insisted this will not be the case.

The firm adds that its reforms will lead to a protection of the 80 staff on site in Mungret – and 60 new jobs in addition.

The focus now switches to the Environmental Protection Agency (EPA) which has the ultimate decision over whether Irish Cement is afforded a licence to operate with the changes.

In a statement, Limerick Against Pollution, the group set up in opposition to the plans, said: “We strongly disagree with the Bord's opinion that there is no risk to public or residential amenity considering that planning has been granted for at least 700 new homes under the plume of the factory and six schools are now operating within sight of the plant.”

“The EPA has a responsibility to ensure recycling is maximised and that Ireland moves towards a circular economy. We can no longer export our waste problems to China. But instead of developing a strategy for dealing with excess plastics, packaging and municipal waste we are choosing to sacrifice our air quality and our children's health,” they added.

The group expects to announce a public meeting soon.

Fianna Fail councillor James Collins hopes the matter is taken all the way to the High Court.

“This decision, in my opinion, will endanger the health of residents for everyone in a 30km radius of the plant, and not just in its immediate vicinity. This isn’t a case of nimbyism. It’s a major public health issue. People’s valid concerns have clearly not been listened to and taken into account. The only option now is to seek a judicial review of the decision in the High Court,” he said.

Fine Gael councillor Daniel Butler took to Twitter to state: “Terrible news for us here in Mungret, Raheen and Dooradoyle. All our campaigning has failed and especially the great voluntary work of Limerick Against Pollution.”

Senator Maria Byrne added: “Disappointing and wrong decision announced from An Bord Pleanála this morning regarding the Irish Cement factory.”

Sinn Fein MEP Liadh Ni Riada called on residents of other towns and villages across the region to stand with residents opposed to the Irish Cement plans.

“This is not just an issue for one city. Studies have shown that emissions from such plants have up to a 30 kilometre emission zone. This is something the entire region should be concerned about,” she said, ”It was quite clear that the city was dead set against the idea. Thousands turned out for protests against it. Every Sinn Féin councillor opposed the plans, our TDs spoke out against it, I myself raised the issue in Europe and made a submission at the oral hearing for the plans. The matter, however, is far from over. The issue now goes to the EPA and we will be standing with the community to help them make their case against the incinerator as clearly and resolutely as possible.”

Her party colleague Maurice Quinlivan described the decision as “shambolic and plainly wrong2.

“People are genuinely angry and perplexed as to why this permission has been granted. This decision feels like a smack in the face for the real and genuine opposition to what they perceive as being bad for Limerick, the region and their families,” he said.

Solidarity councillor Cian Prendiville added: “Unfortunately this just goes to show that the different state bodies can't be relied on the put people and planet before profit. The whole environmental policy is dictated by big business. We will need people power and civil disobedience to stop this dangerous plan.”