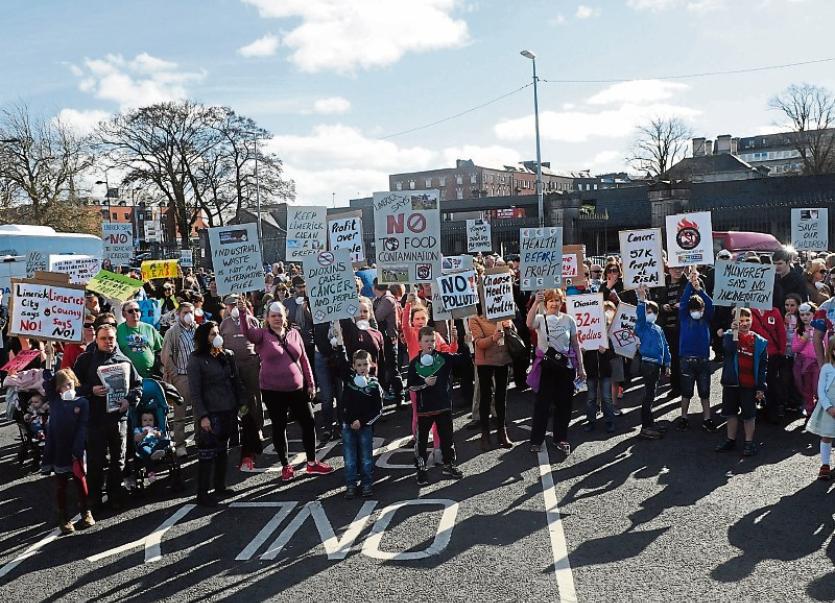 Some of the huge crowd which attended the march against Irish Cement's plans for Mungret. PICTURE: GARETH WILLIAMS

CLOSE to 1,000 people have taken part in a protest against plans by Irish Cement to switch to burning tyres and waste in Mungret.

The demonstration, organised by Limerick Against Pollution, kicked off from the steps of City Hall this Saturday lunchtime.

Residents in Raheen, Dooradoyle, Mungret and other surrounding areas are furious after Irish Cement secured conditional planning permission for the reforms, which will see the use of petroleum coke phased out, and replaced with solid recovered waste and used tyres.

They’re concerned that burning used tyres will release a number of toxic emissions into the air including dioxins, furans and sulphur dioxide which will in turn cause a range of health problems.

However, Irish Cement has always maintained that due to the fact the burning will take place at such a high temperature, there will not be an increase in emissions into the air. In fact, the company says it is necessary for it to reduce its carbon emissions.

Addressing the crowd, Clare Keating of Limerick Against Pollution said: “This proposal brings with it new risks for Limerick: fires, disease, explosions. If an accident were to occur when burning plastics and tyres, the implications for Limerick would be catastrophic. The clean-up would cost the state billions to recover from a serious dioxin spill.

The protest comes against the backdrop of Limerick City and County Council giving the green light to Irish Cement to develop the physical part of the project in Mungret. The focus now shifts to the Environmental Protection Agency, which will decide whether or not Irish Cement may be given a licence to operate in Mungret.

One of the demonstrators, Emily Dubosz, a homeowner in the Mungret area, described the council’s verdict as “insane”.

“It is completely unacceptable to the residents of Mungret, and the surrounding area. We have to take into account the last few years when the winds were really strong. It’s not only about the air. It’s about the fauna and all the animals. Farmers will be affected by this too,” she said.

As the march progressed, demonstrators chanted: “Limerick City, full of grace, County Council your disgrace”, in reference to the grant of planning permission.

The crowd – including many children – were also given masks covering their mouths to wear.

There was a big turnout of local politicians, including Deputies Willie O’Dea, Maurice Quinlivan, Jan O’Sullivan plus Senators Maria Byrne and Kieran O’Donnell.

What a day to make you proud to see over 1000 people unite against Irish Cement by @LAP_Limerick #cleanairlimerick #limerickandproud pic.twitter.com/gQRzgE3qHg

The march was followed by a family fun day at the People’s Park.

For more from the event, and pictures, please see Monday’s edition of the Limerick Leader.