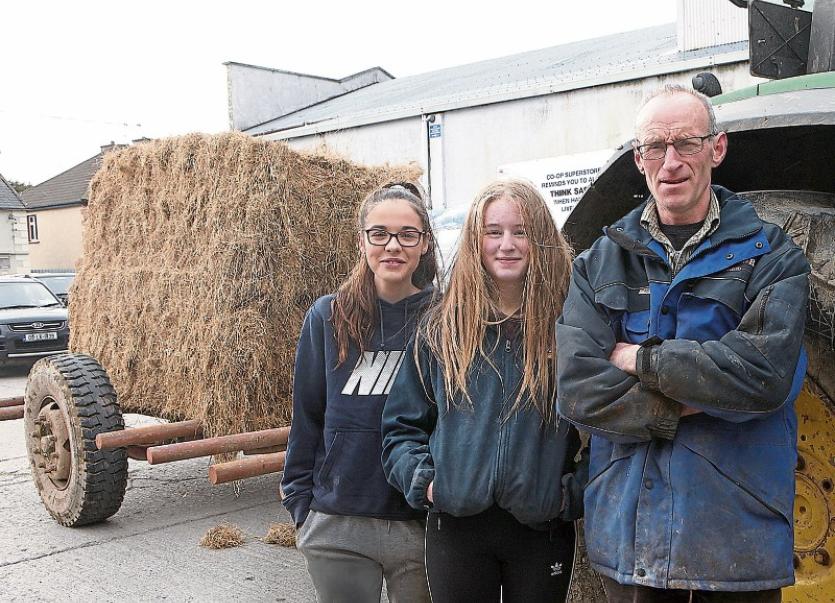 IT’S AN ILL east wind that blows no good and all week farmers from east and west Limerick have been queuing up for imported fodder.

There is something very sick as this is the second time in five years that the winter came early and refused to leave – just like an unwanted house guest.

One man who was in the Cappamore Dairygold co-op store on Thursday evening when imported fodder arrived said he knows a farmer, who declared last summer that he had enough silage for two years. He only has two weeks left now. Cattle were in early and are late getting out. It is unnatural.

The first man waiting for a truck full of UK hay to roll in was Mike O’Donoghue, Gortnagarde. His story resonates with many. He was out of his own supply and has been buying fodder locally for the last week.

“That’s running out as well,” said the dairy and beef farmer. Mike said it is “huge extra expense”.

“The fact that the bad weather has carried so far out into the spring is the issue,” said Mike.

Con Berkery, manager of the Dairygold store, said they received their fifth load this Tuesday and are expecting one each day for the rest of the week.

“Demand is still strong but in fairness to the farmers they are working around the clock to keep animals fed. They would nearly feed their animals before they would feed themselves.

“Even at the fodder crisis meeting on Monday our local vets complimented farmers on how well they are looking after their animals,” said Con.

He said phones were “hopping” with requests for fodder. It rang while he was being interviewed by the Leader.

“We are trying to prioritise the critical ones and then hopefully keep everyone going. Some lads have nothing. They have bought bales from other people. Others might have silage for now but they might not have silage in a week’s time so they are preparing for that,” said Con.

James Blackwell, Dromsally, said he was nearly out of fodder.

“It is the same all over. Lads are just hanging on. It’s a long winter. It has gone on too long. We just can’t get cattle out – the ground conditions are just too poor,” said James.

“The land is too wet to go out and spread fertiliser and anything that was out there has gone grey.

“I had the vet out three times recently when I normally wouldn’t because animals were getting stomach upsets.

“We started feeding our first silage on September 18 and that is going to be seven months shortly. It is very serious – you have extra feeding costs, veterinary costs and the milk price drop.

“But fair play to Dairygold, they were very fast to respond,” said Barry, who also praised local milk advisor Jack Cahill for helping farmers get fodder.