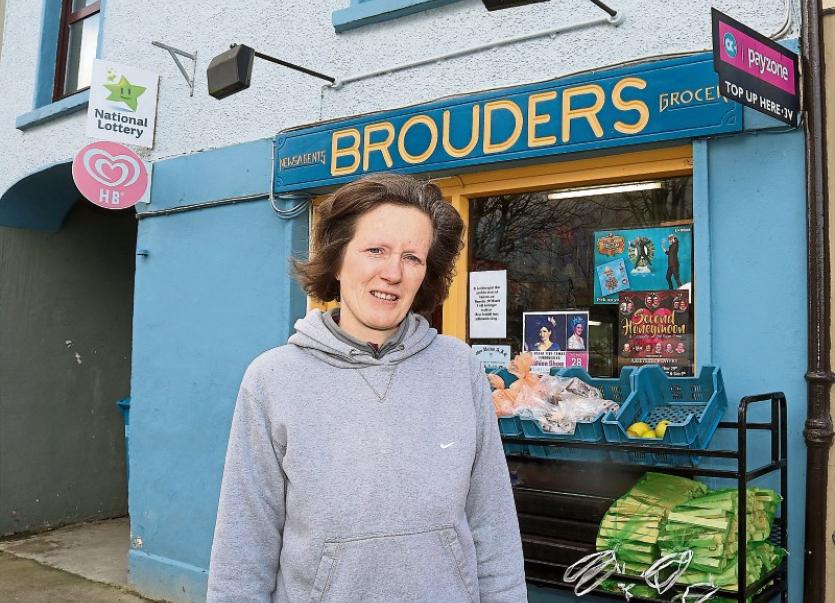 AS Rose Enright closes out the door on her grocery and general store for the last time this Thursday night, it will bring the shutters down on a decades-long business in County Limerick.

Sadly too, it will create yet another gap on Athea’s main street and leave the community with just one shop.

But for Rose, the really sad thing is that nobody wants to take on the business and keep it going.

She is not closing because the business is no longer viable, she told the Limerick Leader this week.  But after a lifetime of dealing with the public, in one capacity or another, Rose is now looking for a bit of a quieter life.

For the past ten years, after she took over the shop from Mary Brouder, keeping the Brouder name over the door, the business has been all-consuming.

It was something she was happy to do, and to continue doing, until now. “At the end of the day, we are all small communities. And your customers become like an extended family,” she explained.

Living on the premises as she has been doing, she was always available. “I would hate to see any of them short of something.”

Even during the heavy snow of Storm Emma earlier this year, Rose kept her shop open for those who could make their way there on foot. And she had bread on offer to boot, thanks to a delivery by Twomeys Bakery. “That meant there was a service here for people when a lot of bigger places shut down completely.”

Rose announced her intention to close about a month ago, a decision which she knows has come as a blow in a community that is fighting hard to retain services. “It is a big void for Athea,” Rose says. “The more businesses you have in an area, the more competition the better. Now there is only one shop left in Athea.”

But she added:  “Nobody wants to work like we have to work anymore.”

Rose grew up next door to her shop, where the family ran a bar and shop. At that time, she recalled this week, Athea had twelve pubs and ten or 12 shops as well as a creamery and there were five petrol stations in the parish.

Later, following a career in the catering business, Rose and her brother sold on the pub licence but opened an off-licence in the family premises.  And when Mary Brouder was about to close, after almost 50 years trading, Rose decided to take it on. “At the time I said I would hate to see another business shut down.”

Now, she said: “I have nothing left to give.”

She will, she admits, find it hard this Thursday, her last day. The past month has been a long good-bye, with customers calling in, speaking of their sadness at seeing a familiar shop close down. And Rose herself has been making her farewells. She went to the local school with her trade-mark “€1-bags” of sweets as a present for each child. In turn, she has been thanked with bunches of flowers.

But Thursday night will mark an end even as a new life beckons for Rose.